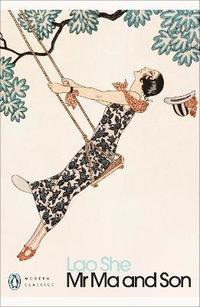 av Lao She
Häftad Engelska, 2022-10-06
113
Köp
Spara som favorit
Finns även som
Visa alla 2 format & utgåvor
A deliciously funny and moving comedy-of-manners about a Chinese father and son's experiences at the height of London's Jazz Age 'He was in London - why be bothered looking at it? Wasn't it bad enough just being there?' Newly arrived from China, Mr Ma and his son Ma Wei run an antiques shop nestled by St Paul's Cathedral, where they try to make a living amid the smog and bustle of 1920s London. As they struggle with money, misunderstandings and the ways of the English - from the overbearing patronage of missionary Reverend Ely to their well-meaning landlady Mrs Weddeburn and her carefree daughter - can understanding, even love, blossom? Both a moving story of the Chinese immigrant experience and a bitingly funny satire on the English, Mr Ma and Son delicately portrays the dreams and disappointments of those seeking a new life in a distant land. Translated by William Dolby, with an introduction by Julia Lovell
Visa hela texten

Lao She was born in 1899 to a poor Manchu family in Beijing. He left China in his mid-twenties to teach Chinese at the University of London, where he stayed for the next five years. Mr Ma and Son, serialized in 1929, was his third and final novel written during his London years. Lao She continued to teach and write upon his return to China, and became an established and respected author renowned for his humorist style. He committed suicide in Beijing in 1966, a few years after being labelled an anti-Maoist and counter-revolutionary by the Red Guards. William Dolby (1936-2015) was a translator from Chinese and Professor of Chinese at Edinburgh University.