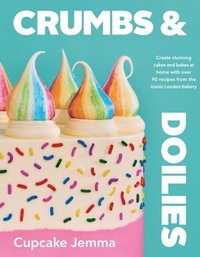 Jemma Wilson (Cupcake Jemma) is the co-owner of the Crumbs & Doilies bakery in London, as well as the main host of the hugely successful Cupcake Jemma YouTube channel (2.3 million subscribers), where Jemma and her team of brilliantly creative bakers have been creating beautiful cakes, bakes, cookies and brownies, and sharing recipes for them online since 2013. Launching her business from a small market stall in 2006, Jemma quickly established herself as one of London's most imaginative and sought-after bakers, opening a Wandsworth production bakery to keep up with demand in 2008, followed by the Crumbs and Doilies bakery and shop in Kingly Court, London, in 2015. This is the first book from Crumbs & Doilies.