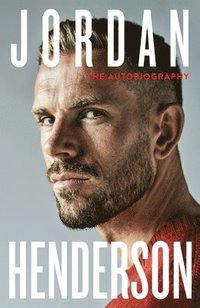 av Jordan Henderson
Inbunden Engelska, 2022-10-27
258
Köp
Spara som favorit
Finns även som
Visa alla 2 format & utgåvor
You've seen him become a Liverpool legend, watched as he and Jude Bellingham lead England through the world cup - now get to know the real Jordan Henderson, both on off the pitch . . . 'A brilliantly told story with a uniquely vivid sense of what it is like on the pitch in matches of extreme importance . . . The perfect book for all football fans' DAILY MAIL 'SPORTS BOOKS OF THE YEAR' __________ Captain. Father. Leader. Fearless ambassador. World-class midfielder. Jordan Henderson is all of these things, and it is why he is one of the most widely respected players of his generation. In this tell-all autobiography, Jordan reveals how his early love for the game as a kid became an all-consuming passion that led him to follow his dream - to play for his home club of Sunderland. Transferred to Liverpool in June 2011, Jordan's early years at the club saw him struggle to settle under Sir Kenny Dalglish then Brendan Rodgers before eventually establishing himself at Anfield as a force of nature in midfield. In 2015, Jordan took the reins from Steven Gerrard. Under his captaincy, Liverpool have reached monumental heights - winning six trophies headed by the Champions League and the Premier League, bringing the club its first league title in 30 years. In this book, Jordan charts his decade-long journey with the Reds, and a behind-the-scenes look at his life both on and off the pitch. A must-read not only for Liverpool fans but for football lovers everywhere, this is the candid behind-the-scenes look into the lire of a top-flight footballer as you've never seen it before.
Visa hela texten

A brilliantly told story with a uniquely vivid sense of what it is like on the pitch in matches of extreme importance . . . The perfect book for all football fans, not just Liverpool supporters * Daily Mail, 'SPORTS BOOKS OF THE YEAR' *

Jordan Henderson, MBE, is one of football's highest-profile players and has captained Liverpool FC since 2015. With the Reds, he has won the Champions League trophy, the Premier League title (marking the first time in 30 years for the club) and, this season, the double win of the FA Cup and League Cup. Outside the football pitch, Jordan's won plaudits for his support for the LGBT+ community and, during Covid, for the NHS, contributing towards his appointment of an MBE in 2021.