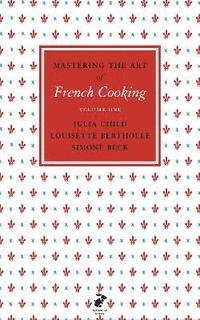 av Julia Child, Louisette Bertholle, Simone Beck
Inbunden Engelska, 2011-03-03
244
Köp
Spara som favorit
Skickas inom 5-8 vardagar.
Gratis frakt inom Sverige över 159 kr för privatpersoner.
Finns även som
Visa alla 1 format & utgåvor
'This isn't just any cookery book. It is Mastering the Art of French Cooking, first published in 1961, and it's a book that is a statement, not of culinary intent, but of aspiration, a commitment to a certain sort of good life, a certain sort of world-view; a votive object implying taste and appetite and a little je ne sais quoi. Julia Child was like Amelia Earhart, or Eleanor Roosevelt: she was a hero who'd gone out there and made a difference. Her books are a triumph, and also a trophy.' AA GILL, The Times This is the classic guide to French cooking, with over 1,000 clear, authentic and delicious recipes for everything from Boeuf Bourguignon to the perfect omelette. Bon appetit!
Visa hela texten

The most instructive book on fine French cooking written in the English language -- Elizabeth David This book fundamentally altered the way a basic human activity was preceived and pursued -- A. O. Scott * The New York Times * Has been described as being the best book about French cooking in English ... I agree -- Ambrose Heath * Guardian * As close to a divine text as you can get -- Matthew Fort * Guardian *

Julia Child revolutionised cooking in the US and this was the cookbook that launched her career. A native of California and a Smith College graduate, Julia Child studied at Paris's famous Cordon Bleu, and worked under various distinguished French chefs. In 1951 she started her own cooking school in Paris, L'Ecole des Trois Gourmandes, with Simone Beck and Louisette Bertholle and the three women started compiling this cookbook. Mastering the Art of French Cooking was published in 1961 and was an instant hit. Julia Child consequently began appearing on the television series The French Chef, which aired for many years all over the United States, and many more books and TV series ensued.