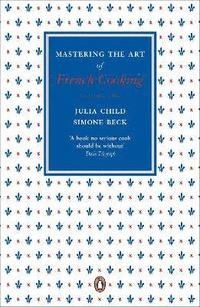 As close to a divine text as you can get -- Matthew Fort Guardian It will gladden the heart of all good cooks ... An alchemist's stone which enables any cook to turn base ingredients to gold Sunday Times

Julia Child revolutionised cooking in the US and this was the cookbook that launched her career. A native of California and a Smith College graduate, Julia Child studied at Paris's famous Cordon Bleu, and worked under various distinguished French chefs. In 1951 she started her own cooking school in Paris, L'Ecole des Trois Gourmandes, with Simone Beck and Louisette Bertholle and the three women started compiling this cookbook. Mastering the Art of French Cooking was published in 1961 and was an instant hit. Julia Child consequently began appearing on the television series The French Chef, which aired for many years all over the United States, and many more books and TV series ensued.