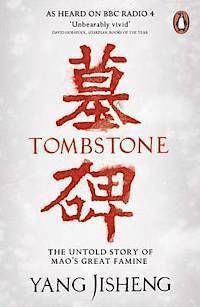 av Yang Jisheng, Edward Friedman
Häftad Engelska, 2013-10-31
153
Köp
Spara som favorit
Finns även som
Visa alla 1 format & utgåvor
Yang Jisheng's Tombstone is the book that broke the silence on of one of history's most terrible crimes More people died in Mao's Great Famine than in the entire First World War, yet this story has remained largely untold, until now. Still banned in China, Tombstone draws on the author's privileged access to official and unofficial sources to uncover the full human cost of the tragedy, and create an unprecedented work of historical reckoning. 'A book of great importance' Jung Chang, author of Wild Swans 'The first proper history of China's great famine ... So thorough is his documentation that some are already calling Yang "China's Solzhenitsyn"' Anne Applebaum, author of Gulag: A History
Visa hela texten

A book of great importance -- Jung Chang, author of 'Wild Swans' The first proper history of China's great famine ... So thorough is his documentation that some are already calling Yang "China's Solzhenitsyn" -- Anne Applebaum, author of 'Gulag: A History' In 1989 hundreds, perhaps thousands, of Chinese died in the June Fourth massacre in Beijing, and within hours hundreds of millions of people around the world had seen images of it on their television screens. In the late 1950s, also in Communist China, roughly the inverse happened: thirty million or more died while the world, then and now, has hardly noticed. If the cause of the Great Famine had been a natural disaster, this double standard might be more understandable. But the causes, as Yang Jisheng shows in meticulous detail, were political. How can the world not look now? -- Perry Link, University of California, Riverside Though a sense of deep anger imbues Yang Jisheng's book, it is all the more powerful for its restraint ... Tombstone meticulously demonstrates that the famine was not only vast, but manmade; and not only manmade but political, born of totalitarianism -- Tania Branigan * Guardian * Tombstone is not just a history but a political sensation ... rich with details ... there is no doubting Yang Jisheng's immense political courage in compiling and writing it ... His book is not just a tombstone for his father and other famine victims, but for the reputation of the Communist party's leadership at a time when they should have acted -- Rana Mitter * Guardian *

Yang Jisheng was born in 1940. He worked for many years at Xinhua News Agency, until his retirement in 2001. From the early 1990s onwards Yang interviewed survivors and collected records of the Great Famine (1959-61), eventually accumulating some 10 million words of testimony. This was published in Chinese originally in two volumes (the English-language edition is edited down) and has been widely acclaimed as the book that broke a widespread official silence on the subject. Tombstone remains banned in China.