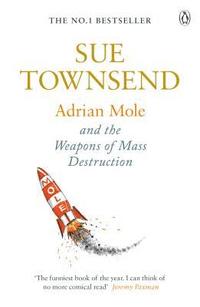 Adrian Mole and The Weapons of Mass Destruction

av Sue Townsend
Häftad Engelska, 2012-01-19
114
Köp
Spara som favorit
Finns även som
Visa alla 1 format & utgåvor
'The funniest person in the world' Caitlin Moran 'My comfort read. The best diaries ever written - with apologies to Samuel Pepys, Bridget Jones and me' ADAM KAY The hilarious SEVENTH BOOK in Sue Townsend's bestselling series, sees Adrian fall in love, be inconvenienced by the war and face his new nemesis: a swan from the local canal . . . _____________ Wednesday April 2nd My birthday. I am thirty-five today. I am officially middle-aged. It is all downhill from now. A pathetic slide towards gum disease, wheelchair ramps and death. Adrian Mole is middle-aged but still scribbling. Working as a bookseller and living in Leicester's Rat Wharf; finding time to write letters of advice to Tim Henman and Tony Blair; locked in mortal combat with a vicious swan called Gielgud; measuring his expanding bald spot; and trying to win-over the voluptuous Daisy . . . Adrian yearns for a better more meaningful world. But he's not ready to surrender his pen yet... ______________ 'Hilarious. Deft, gleeful mockery impales modish fads, from home make-overs to new-age crazes, while fiercer irony is trained on the country's involvement with Iraq' Sunday Times 'Richly comic ... stuffed full of humour, tragedy, vanity, pathos and, very occasionally, wisdom' Guardian 'Completely hilarious, laugh-out-loud, a joy' Daily Mirror
Visa hela texten

Celebrate Adrian Mole's 50th Birthday with this new edition of the seventh book in his diaries where Adrian falls in love, is inconvenienced by the war and faces his new nemesis: a swan from the local canal * from the publisher's description * As funny as anything Townsend has written, in which the loft-dwelling Mole wrestles with credit-card debt, WMD and where to find a dentist * Sunday Times * The funniest book of the year. I can think of no more comical read -- Jeremy Paxman * Sunday Telegraph * He will be remembered some day as one of England's great diarists * Evening Standard * The funniest person in the world * Caitlin Moran *

Sue Townsend was born in Leicester in 1946. Despite not learning to read until the age of eight, leaving school at fifteen with no qualifications and having three children by the time she was in her mid-twenties, she always found time to read widely. She also wrote secretly for twenty years. After joining a writers' group at The Phoenix Theatre, Leicester, she won a Thames Television award for her first play, Womberang, and became a professional playwright and novelist. After the publication of The Secret Diary of Adrian Mole Aged 133/4, Sue continued to make the nation laugh and prick its conscience. She wrote seven further volumes of Adrian's diaries and five other popular novels - including The Queen and I, Number Ten and The Woman Who Went to Bed for a Year - and numerous well received plays. Sue passed away in 2014 at the age of sixty-eight. She remains widely regarded as Britain's favourite comic writer.