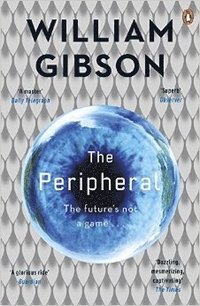 av William Gibson
(1 röst)  |  Läs 1 recension
Häftad Engelska, 2015-04-23
113
Köp
Spara som favorit
Finns i lager! Skickas inom 1-2 vardagar.
Fri frakt inom Sverige över 159 kr för privatpersoner.
Finns även som
Visa alla 1 format & utgåvor
The Peripheral by William Gibson is a thrilling new novel about two intertwined futures, from the bestselling author of Neuromancer 'Wild, richly satisfying . . . big-screen, popcorn-chewing thrills. What a glorious ride' Guardian In the near future in a broken down rural America, Flynne Fisher scrapes a living as a gamer for rich players. One night, working a game set in a futuristic but puzzlingly empty London, she sees a death that's unnervingly vivid. Soon after she gets word that it isn't a game after all - the future she saw is all too real, she's the only witness to a murder and someone from that unreal tomorrow now wants her dead. The story of a young woman caught between two worlds, The Peripheral interweaves two futures - pre-apocalypse USA and post-apocalypse London - to tell a story which gets right to heart of the way we live now. 'A tightly plotted, tautly paced novel that unfolds with the dream logic of a fairy tale' The Times Literary Supplement 'Frightening plausible. Not just a unique and brilliantly talented SF novelist but a social and psychological visionary. A wonderful addition to a brilliant oeuvre' The Times 'Superb . . . frantic with imagination' Ned Beauman, Observer 'Fast-moving, accessible, instantly gripping, so laden with cliffhangers you become afraid he'll run out of cliffs' SFX According to the Guardian, in terms of influence Gibson is 'probably the most important novelist of the past two decades'. The Peripheral, which marks a return to the futurism of Neuromancer, will be adored by Gibson readers and will also appeal to fans of Ender's Game, Looper and Source Code.
Visa hela texten

What a glorious ride! Like the woman said: brain 'splode -- Sam Leith * Guardian * Superb . . . frantic with imagination and frantic with the appetite to see what happens next -- Ned Beauman, Observer

William Gibson is credited with having coined the term "cyberspace" and having envisioned both the Internet and virtual reality before either existed. His first novel Neuromancer sold more than six million copies worldwide, and Count Zero and Mona Lisa Overdrive completed the trilogy. He has written six further novels about the strange contemporary world we inhabit. His most recent novels include Spook Country, Zero History and The Peripheral. His non-fiction collection, Distrust That Particular Flavour, compiles assorted writings and journalism from across his career.