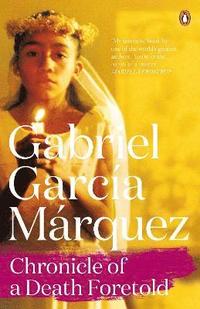 Chronicle of a Death Foretold

av Gabriel Garcia Marquez
(1 röst)
Häftad Engelska, 2014-03-06
98
Köp
Spara som favorit
Finns även som
Visa alla 2 format & utgåvor
Chronicle of a Death Foretold is a compelling, moving story exploring injustice and mob hysteria by the Nobel Laureate Gabriel Garcia Marquez, author of One Hundred Years of Solitude and Love in the Time of Cholera. 'On the day they were going to kill him, Santiago Nasar got up at five-thirty in the morning to wait for the boat the bishop was coming on' Santiago Nasar is brutally murdered in a small town by two brothers. All the townspeople knew it was going to happen - including the victim. But nobody did anything to prevent the killing. Twenty seven years later, a man arrives in town to try and piece together the truth from the contradictory testimonies of the townsfolk. To at last understand what happened to Santiago, and why. . . 'A masterpiece' Evening Standard 'A work of high explosiveness - the proper stuff of Nobel prizes. An exceptional novel' The Times 'Brilliant writer, brilliant book' Guardian
Visa hela texten

A work of high explosiveness - the proper stuff of Nobel prizes. An exceptional novel. * The Times * A masterpiece * Evening Standard *

Gabriel Garcia Marquez was born in Aracataca, Colombia, in 1927. He studied at the National University of Colombia in Bogota, and later worked as a reporter for the Colombian newspaper El Espectador and as a foreign correspondent in Rome, Paris, Barcelona, Caracas and New York. He is the author of several novels and collections of stories, including Eyes of a Blue Dog (1947), Leaf Storm (1955), No One Writesto the Colonel (1958), In Evil Hour (1962), Big Mama's Funeral (1962), One Hundred Years of Solitude (1967), Innocent Erendira and Other Stories (1972), The Autumn of the Patriarch (1975), Chronicle of a Death Foretold (1981), Love in the Time of Cholera (1985), The General in His Labyrinth (1989), Strange Pilgrims (1992), Of Love and Other Demons (1994) and Memories of My Melancholy Whores (2005). Many of his books arepublished by Penguin. He was awarded the Nobel Prize for Literature in 1982. Gabriel Garcia Marquez died in 2014.