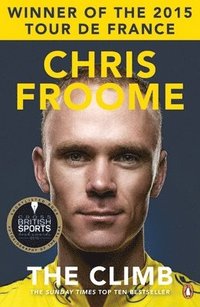 av Chris Froome
Häftad Engelska, 2015-06-04
104
Köp
Spara som favorit
WINNER OF THE 2018 GIRO D'ITALIA! THREE TIME WINNER OF THE TOUR DE FRANCE. THE FIRST MAN SINCE BERNARD HINAULT TO HOLD THE MAGLIA ROSA, THE MAILLOT JAUNE AND THE MAILLOT ROJO AT THE SAME TIME. THIS IS CHRIS FROOME IN HIS OWN WORDS. 'Engaging, vividly evoked' Mail on Sunday, Books of the Year 'What Chris has done is phenomenal' Sir Chris Hoy Growing up in Kenya, biking down mile after mile of dusty road, and staying in a humble tin hut, he developed a fierce passion and determination to win. The road to Europe was long, gruelling and filled with setbacks - but it prepared him for teamwork as a domestique and then the leap to leader of Team Sky and a shot at winning the Tour de France. In The Climb, written with the renowned investigative reporter David Walsh, he vividly recounts the struggles, the rivalries, the battles, the comebacks. Finally he traces his path to triumph and his mission to help clean up cycling. Inspiring and exhilarating, it will leave you ready to face your own challenges in life, whatever they may be.
Visa hela texten

In this engaging memoir, Froome recalls his childhood in Nairobi, gives a vividly evoked account of his victory and doesn't attempt to gloss over the rivalry between the two Team Sky riders * Mail on Sunday, Books of the Year * Hard to beat for a top pro's perspective * Financial Times * Froome's story is an intriguing one -- Richard Williams * Guardian * A brutally tough upbringing -- Paul Kimmage The key to (Chris's) success is his mental resilience. He might look like an unlikely strong man at first glance, but I wouldn't let that fool you. Beneath the surface there is a real fighter. He's a tough guy -- Sir Dave Brailsford Chris Froome is an absolutely phenominal athlete. It blows my mind how incredible his performances have been -- Victoria Pendleton Even though we don't see each other so much anymore he has lived in my dreams. He (was) wearing the yellow jersey every day and I almost felt I was wearing it myself -- David Kinjah, Chris Froome's former cycling mentor and coach, Safari Simbaz Just a few years ago we did not have anyone who could podium, but now we have two cyclists who can win the Tour in consecutive years. It is a phenomenal achievement and what Chris has done is phenomenal -- Sir Chris Hoy

Chris Froome was born in Nairobi to British parents. He was educated and raised in South Africa and now races for Team GB and Team Sky. He is undoubtedly the finest Grand Tour cyclist of his generation and is the first man since Bernad Hinault to hold all three Grand Tours at the same time. His escape on the Colle delle Finestre during Stage 19 of the 2018 Giro D'Italia, that secured him the Maglia Rosa, was roundly considered one of the most daring attacks in modern cycling history.