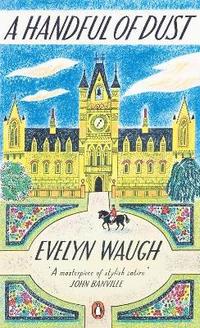 A Handful of Dust

Evelyn Waugh was born in Hampstead in 1903, and educated at Lancing and Hertford College, Oxford. In 1928 he published his first work, a life of Dante Gabriel Rosetti, and his first novel, Decline and Fall, which was soon followed by Vile Bodies (1930), Black Mischief (1932), A Handful of Dust (1934) and Scoop (1938). During these years he travelled extensively and published a number of travel books. In 1939 he was commissioned in the Royal Marines and later transferred to the Royal Horse Guards, serving in the Middle East and in Yugoslavia. He went on to write a number of other books, including Brideshead Revisited (1945) and Men at Arms (1952). Evelyn Waugh died in 1966.