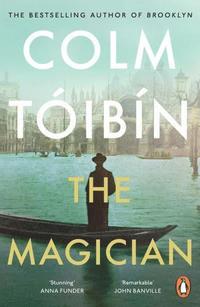 Winner of the Rathbones Folio Prize

Köp
Spara som favorit
Kan levereras innan julafton!
THE SUNDAY TIMES TOP TEN BESTSELLER WINNER OF THE RATHBONES FOLIO PRIZE 2022 SHORTLISTED FOR THE WALTER SCOTT PRIZE FOR HISTORICAL FICTION 2022 From one of our greatest living writers comes a sweeping novel of unrequited love and exile, war and family. The Magician tells the story of Thomas Mann, whose life was filled with great acclaim and contradiction. He would find himself on the wrong side of history in the First World War, cheerleading the German army, but have a clear vision of the future in the second, anticipating the horrors of Nazism. He would have six children and keep his homosexuality hidden; he was a man forever connected to his family and yet bore witness to the ravages of suicide. He would write some of the greatest works of European literature, and win the Nobel Prize, but would never return to the country that inspired his creativity. Through one life, Colm Toibin tells the breathtaking story of the twentieth century. ___________________________________ 'As with everything Colm Toibin sets his masterful hand to, The Magician is a great imaginative achievement -- immensely readable, erudite, worldly and knowing, and fully realized' - Richard Ford 'No living novelist dramatizes artistic creation as profoundly, as luminously, as Colm Toibin . . . reading him is among the deepest pleasures our literature can offer' - Garth Greenwell 'This is not just a whole life in a novel, it's a whole world' - Katharina Volckmer
Visa hela texten

This is an enormously ambitious book, one in which the intimate and the momentous are exquisitely balanced. It is the story of a man who spent almost all of his adult life behind a desk or going for sedate little post-prandial walks with his wife. From this sedentary existence Toibin has fashioned an epic * Guardian * I love everything Colm Toibin has written and The Magician is another masterpiece . . . Historical fiction at its best -- Nicola Sturgeon * New Statesman, Books of the Year * Sumptuous and satisfying * The Times, A Best Fiction Book of 2021 * The Magician, recreates as biographical fiction the life, thoughts and achievements of Thomas Mann. It is dark, beautifully constructed and, I think, as near as one author can get to entering the mind of another -- Melvyn Bragg * New Statesman, Books of the Year * The Magician uses the life of Thomas Mann to explore the complex relationships between intimacy and history, public and private lives, and the slippery nature of creativity itself. I found it mesmerising -- Fintan O'Toole * New Statesman, Books of the Year * Taking on Thomas Mann is no easy task, but Toibin's fictional account of the inner life of the great German novelist is masterful -- Frederick Studemann * FT, Best Books of 2021: Critics' Picks * The Magician is not a biography but a work of art, an emotional reckoning with a century of change, centred on a man who tried to stand upright but was swayed by the winds of that change * The Times * In a novel of many moods, its every page rings true * Mail on Sunday * An expansive yet deeply personal exploration of the life of exiled German writer Thomas Mann . . . Containing beautiful observations on life and literature, and a sweeping sense of historical scale, The Magician remains tightly written and wryly funny * Independent * Both epic and intimate, The Magician is most successful in its moving portrait of three generations of sprawling, loving, fractious family life . . . a triumph * Financial Times * A triumph * Daily Telegraph * A sweeping overview of Thomas Mann's life -- Justine Jordan * Guardian, Best Fiction of 2021 * The Irish novelist famed for Brooklyn imagines the world of the German Nobel-winning writer Thomas Mann and his secret desire for handsome young men, in what the Times reviewer John Self says is his best novel yet * The Times, Best Books of 2021 * As with everything Colm Toibin sets his masterful hand to, The Magician is a great imaginative achievement -- immensely readable, erudite, worldly and knowing, and fully realized -- Richard Ford Colm Toibin has already written several truly extraordinary novels. The Magician may be the very best of them * Sunday Independent * The Magician is a remarkable achievement. Mann himself, one feels certain, would approve -- John Banville This graceful novel is a moving and intimate portrait by one master of another . . . It is a stunning tribute to the great man, and a vital story for now -- Anna Funder A masterpiece, vast and luminous . . . witty and profound and truthful -- Tessa Hadley Extensively researched and lyrically wrought . . . a complex but empathetic portrayal of a writer in a lifelong battle against his innermost desires, his family and the tumultuous times they endure * Time, Best Books of Fall 2021 * No living novelist dramatizes artistic creation as profoundly, as luminously, as Colm Toibin, or conveys so well the entanglement of imagination and desire . . . Reading him is among the deepest pleasures our literature can offer -- Garth Greenwell, author of Cleanness and What Belongs to You This is not just a whole life in a novel, it's a whole world - with all its wonders, tragedies and sacrifices. I loved every page of this beautiful and immersive journey into The Magician's mind -- Katharina Volckmer, author of The Appointment Toibin's symphonic and moving novel humanizes [Mann] . . . Maximalist in scope but intimate in feeling * New York Times * Mr. Toibin wields a dramatically stripped-