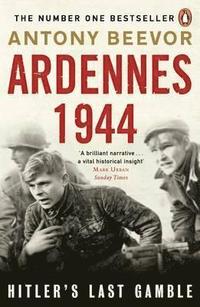 av Antony Beevor
Häftad Engelska, 2016-10-06
108
Köp
Spara som favorit
Skickas inom 5-8 vardagar.
Gratis frakt inom Sverige över 159 kr för privatpersoner.
Finns även som
Visa alla 2 format & utgåvor
From the bestselling author of Stalingrad, Berlin and D-Day, Antony Beevor's Ardennes 1944: Hitler's Last Gamble tells the story of the German's ill-fated final stand. On 16 December, 1944, Hitler launched his 'last gamble' in the snow-covered forests and gorges of the Ardennes. He believed he could split the Allies by driving all the way to Antwerp, then force the Canadians and the British out of the war. Although his generals were doubtful of success, younger officers and NCOs were desperate to believe that their homes and families could be saved from the vengeful Red Army approaching from the east. Many were exultant at the prospect of striking back. The Ardennes offensive, with more than a million men involved, became the greatest battle of the war in western Europe. American troops, taken by surprise, found themselves fighting two panzer armies. Belgian civilians fled, justifiably afraid of German revenge. Panic spread even to Paris. While many American soldiers fled or surrendered, others held on heroically, creating breakwaters which slowed the German advance. The harsh winter conditions and the savagery of the battle became comparable to the eastern front. And after massacres by the Waffen-SS, even American generals approved when their men shot down surrendering Germans. The Ardennes was the battle which finally broke the back of the Wehrmacht.
Visa hela texten

This is World War II as Tolstoy would have described it - the great and the small * Washington Post (on 'The Second World War') * Rightly deserves its place on the shelves of any serious historian of the Second World War. Powerful and authoritative . . . Beevor weaves a masterful narrative based on the viewpoints of a vast range of people. Marshalling a coherent narrative out of an unwieldy sequence of localised attacks, counterattacks, deceptions, and feints demands the attention of a master military historian. In Antony Beevor, the Ardennes offensive has found one * Military History Monthly (Book of the Month) * What leaves a lasting impression is the huge power the American army as a whole mustered to smash back the Germans. A superpower was being born * Bookseller, Interview with Antony Beevor * If you're a fan of Beevor's work, find some space on your bookshelf for this one. If you've never read him before, start here and work your way back - it's history nerd heaven! * History of War Magazine * Unflinching. As Ardennes 1944 makes clear, Hitler misjudged the strength and resilience of the US army. It was his last gamble and it failed * Prospect * What stands out most . . . is the effects of violent warfare. By the end of the counteroffensive the snowfields were littered with frozen corpses and the wreckage of hundreds of tanks and armoured vehicles * Literary Review * A superb addition to the canon which has taken us from Stalingrad to Normandy in 1944 and the final gruesome battle for Berlin, not forgetting the masterly single-volume history of the entire war. It is written with all of Beevor's customary verve and elegance. His remarkable and trademark ability is to encompass the wide sweep of campaigns yet never forget the piquant details of what happened to the individual . . . He focuses brilliantly on the key moments that turned the battle * Evening Standard * As impeccably researched, insightfully observed and superbly written as its bestselling predecessors -- Charlotte Heathcote * Sunday Express * Rich in detail and drama. Enthralling * Mail on Sunday * If there's one thing that sets Beevor apart from other historians - beyond his gifts as a storyteller - it's that he is not afraid to look at the most uncomfortable, even frightening subjects, but does so in a way that doesn't threaten the reader. It's like having Virgil there to lead you through the underworld: he doesn't leave you stranded amid the horror but leads you back again, a wiser person for having undergone the journey -- Keith Lowe * Daily Telegraph * An indispensable book. It is a great strength of Beevor's writing that he takes time to explain how small pieces of knowledge - the kind of thing passed on by battle-hardened soldiers themselves - could make the difference between survival and a futile death -- David Aaronovitch * The Times * Beevor weaves a brilliant narrative out of all this drama. As in his previous books, his gifts are strongest in focusing on telling details from different perspectives . . . A vital historical insight -- Mark Urban * Sunday Times * A portrait of war . . . startling in its detail. Beevor has the art of preserving the individual perspective on the battlefield while placing it among the perspectives of platoon, regiment, division, commanders, politicians and civilians. This book clarifies, without simplifying, the human experiences and political stakes of the battle for the Ardennes Forest, bringing realism to the battlefield and coherence to the larger history of the war -- Timothy Snyder * Guardian * A sweeping, sobering read, written with all the confidence and aplomb that Beevor fans would expect. Beevor is as good on the rows behind the front lines as he is on the battles themselves * Independent * Formidable . . . Beevor is a field marshal of facts. Under his brisk control the story of Hitler's final gamble is another example of the kind of action-packed, densely informed narrative that has proved such a formidable

Antony Beevor is the author of Crete: The Battle and the Resistance (Runciman Prize), Stalingrad (Samuel Johnson Prize, Wolfson Prize for History and Hawthornden Prize), Berlin: The Downfall, The Battle for Spain (Premio La Vanguardia), D-Day: The Battle for Normandy (Prix Henry Malherbe and the RUSI Westminster Medal), The Second World War, Ardennes 1944 (Prix Medicis shortlist) and Arnhem. The number one bestselling historian in Britain, Beevor's books have appeared in thirty-three languages and have sold over eight million copies. A former chairman of the Society of Authors, he has received a number of honorary doctorates. He is also a visiting professor at the University of Kent and an Honorary Fellow of King's College, London. He was knighted in 2017.