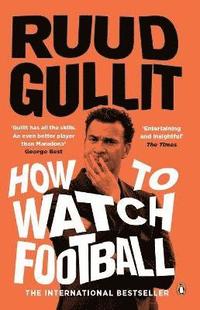 How To Watch Football

av Ruud Gullit
(1 röst)  |  Läs 1 recension
Häftad Engelska, 2017-08-03
108
Köp
Spara som favorit
Finns även som
Visa alla 2 format & utgåvor
How can one striker be better than three? Why do the best defenders never need to make a tackle? What's the secret of Tiki-taka? Welcome to Ruud Gullit's masterclass on how to 'read' a match. From his unrivalled perspective as player, manager and pundit, the Dutch football legend shows us everything to look for in a 90 minute match. From formations and tactical decisions to player qualities and pivotal moments, Ruud Gullit unveils the hidden patterns on the pitch. Packed with his acute insights, original observations and talking points, How to Watch Football will quite simply change the way you see the beautiful game.
Visa hela texten

Offers an intriguing counterpoint -- Donald McRae * Guardian * Entertaining and insightful * The Times * Gullit has all the skills. An even better player than Maradona -- George Best Ruud Gullit was the best player in the world. His sheer energy could create chances -- David Winner He manages to convey the sense that football is really quite simple if you're a genius like him, but without actually being annoying. A rare talent * Metro *

Ruud Gullit was twice voted World Football Player of the Year and is widely regarded as one of the world's best ever players. Born in 1962 in Amsterdam, he was captain of the Netherlands team that was victorious at Euro 88 and played in the 1990 World Cup. He went on to manage Chelsea, Newcastle, Feyenoord, LA Galaxy and Terek Grozny. His career now extends to broadcasting, public speaking and hosting. He speaks five languages.