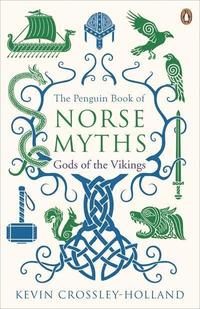 The Penguin Book of Norse Myths

Gods of the Vikings

av Kevin Crossley-Holland
Häftad Engelska, 2018-02-01
159
Köp
Spara som favorit
Skickas inom 5-8 vardagar.
Fri frakt inom Sverige för privatpersoner.
Finns även som
Visa alla 1 format & utgåvor
'Burning ice, biting flame; that is how life began' The extraordinary Scandinavian myth cycle is one of the most enduring, exciting, dramatic and compelling of the world's great stories. The Penguin Book of the Norse Myths compellingly retells these stories for the modern reader, taking us from the creation of the world through the building of Asgard's Wall to the final end in Ragnarok. You'll discover how Thor got his hammer and how Odin lost his eye, the terrible price of binding the wolf Fenrir and why Loki the trickster can never be trusted. The Norse myths are as thrilling to read as they are of vast cultural and historical importance. In this gripping book Kevin Crossley-Holland brings alive the passion, cruelty and heroism of these unforgettable stories.
Visa hela texten

A collection of dramatic, moving, intricately structured stories ... a scholarly survey and compendium of Norse mythology ... a sustained poem distinguished by the icy precision of its language * The Times Educational Supplement * Stately or bucolic, heroic or comic, romantic or gross, horrific or gentle, deeply ironic or deeply moving, the myths here retold yield up their mood and substance * The Times Literary Supplement *

Kevin Crossley-Holland is an eminent poet, translator and prize-winning children's author. His translations of Old English poetry are brought together in The Anglo-Saxon World, and he has also translated The Exeter Book Riddles. Among his many publications are the Viking Sagas, eight volumes of poetry, various anthologies, including The Oxford Book of Travel Verse and Folk Tales of the British Isles, an illustrated book for children entitled Norse Myths: Tales of Odin, Thor and Loki, as well as two operas, a play and a memoir. He was previously Gregory Fellow in Poetry at the University of Leeds, editorial director of Victor Gollancz, Lecturer in Anglo-Saxon Literature and Culture for the Tufts University London program, Fulbright Visiting Scholar at St Olaf College and Endowed Chair in the Humanities and Fine Arts at the University of St Thomas. He is President of the School Library Association from 2012-2017, a fellow of the Royal Society of Literature, an Honorary Fellow of St Edmund Hall, Oxford, and has received Honorary Doctorates from both Anglia Ruskin and Worcester Universities. He lives in Norfolk.