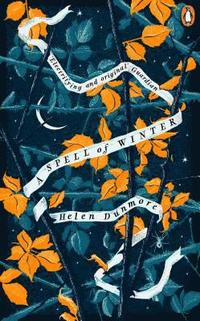 A Spell of Winter

WINNER OF THE WOMEN'S PRIZE FOR FICTION

av Helen Dunmore
Häftad Engelska, 2019-06-06
108
Köp
Spara som favorit
Finns även som
Visa alla 2 format & utgåvor
WINNER OF THE WOMEN'S PRIZE FOR FICTION 'Tense, dark and intensely gripping . . . written so seductively that passages sing out from the page ' Sunday Times Cathy and her brother, Rob, don't know why they have been abandoned by their parents. Alone in their grandfather's decaying country house, they roam the wild grounds freely with minds attuned to the rural wilderness. Lost in their own private world, they seek and find new lines to cross. But as the First World War draws closer, crimes both big and small threaten the delicate refuge they have built. Cathy will do anything to protect their dark Eden from anyone, or anything, that threatens to destroy it. 'An electrifying and original talent, a writer whose style is characterized by a lyrical, dreamy intensity' Guardian 'Stops you in your tracks with the beauty of its writing' Observer 'Has a strong and sensuous magic' The Times 'Her spellbinding, lyrical prose is close to poetry' Daily Mail
Visa hela texten

A marvellous novel about forbidden passions * Daily Mail * An intensely gripping book...written so seductively that some passages sing out from the page, like music for the eyes * Sunday Times * A hugely involving story which often stops you in your tracks with the beauty of its writing * Observer * An electrifying and original talent, a writer whose style is characterized by a lyrical, dreamy intensity * Guardian *

Helen Dunmore was an award-winning novelist, children's author and poet. She published twelve novels including Zennor in Darkness, which won the McKitterick Prize; Burning Bright; A Spell of Winter, which won the inaugural Orange Prize in 1996; Talking to the Dead; Your Blue-Eyed Boy; With Your Crooked Heart; The Siege, which was shortlisted for the 2001 Whitbread Novel of the Year Award and the Orange Prize for Fiction 2002; Mourning Ruby and House of Orphans. She was posthumously awarded the Costa 2017 prize for her poetry collection Inside the Wave.