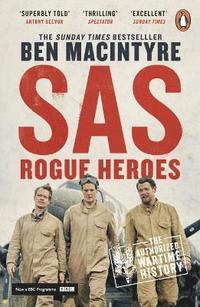 av Ben Macintyre
Häftad Engelska, 2022-10-27
119
Köp
Spara som favorit
Finns även som
Visa alla 3 format & utgåvor
THE SUNDAY TIMES NUMBER ONE BESTSELLER THE BOOK BEHIND THE HIT BBC SERIES SAS: ROGUE HEROES, STARRING CONNOR SWINDELLS, JACK O'CONNELL, ALFIE ALLEN AND DOMINIC WEST From the secret SAS archives and bestselling author Ben Macintyre: The first ever authorized history of the SAS. 'A master at setting the pulse racing' Daily Mail ________________ In the summer of 1941, at the height of the war in the Western Desert, a bored and eccentric young officer, David Stirling, has a vision for a new kind of war: attacking the enemy where they least expect it - from behind their own lines. Despite the intense opposition of many in British High Command, Winston Churchill personally gives Stirling permission to recruit the toughest, brightest and most ruthless soldiers he can find. And so begins the most celebrated and mysterious military organisation in the world: the SAS. With unprecedented access to the SAS secret files, unseen footage and exclusive interviews with its founder members, SAS: Rogue Heroes tells the remarkable story behind an extraordinary fighting force, and the immense cost of making it a reality. ________________ 'Thorough and highly entertaining. It would be nigh on impossible to praise it too highly' Daily Express 'Impeccably researched, superbly told - by far the best book on the SAS in World War II' Antony Beevor 'Told with deceptive brilliance . . . one the finest books of its kind' Evening Standard
Visa hela texten

Ben Macintyre is the multimillion-copy bestselling author of books including Colditz, Agent Sonya, SAS- Rogue Heroes, The Spy and the Traitor, Agent Zigzag, Operation Mincemeat and A Spy Among Friends. He is a columnist and Associate Editor at The Times, and has worked as the newspaper's correspondent in New York, Paris and Washington. Several of his books have been made into films and television series, including Operation Mincemeat, A Spy Among Friends and SAS- Rogue Heroes.