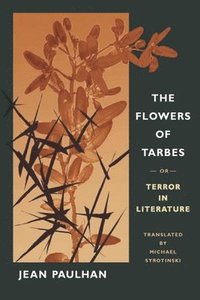 The Flowers of Tarbes

or, Terror in Literature

"One of the most important works of contemporary literary criticism."

Jean Paulhan (1884-1968) is often referred to as the "grey eminence" of the publishing world in France, where he played a central role in literary and intellectual life. He was editor of the Nouvelle Revue francaise from 1925-1940, and under him it became the most influential literary journal of interwar France. Michael Syrotinski is a professor of French at the University of Aberdeen, Scotland. He previously co-translated Paulhan's Progress in Love on the Slow Side, a collection of short narrative fiction.