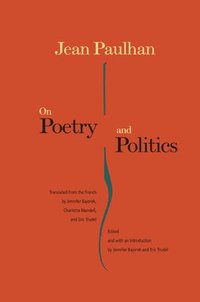 On Poetry and Politics

av Jean Paulhan, Jennifer Bajorek, Eric Trudel
Inbunden Engelska, 2008-08-04
429
Köp
Spara som favorit
Jean Paulhan was a legendary editorial figure of twentieth-century French literature, assisting and publishing many of the most important writers of his lifetime. He was also the author of several volumes of fiction and numerous essays dealing with literature, art, rhetoric, and language. Yet he published his own work in a manner that deliberately kept it inconspicuous, or as Maurice Blanchot put it, "in the margins." A critics' critic, he gave his texts the same scrupulous attention he gave to others, and was recognized as a discreet master. But when he was sufficiently upset or angry, as he was when French politics endangered the intellectual freedom of French writers and writing, he published ferociously. This volume is the first English translation of these major essays, presenting in one book the development of his thinking on his most studied subject: how language works, or, to echo Blanchot again, how literature is possible. Much of contemporary literary theory finds its modern antecedents in Paulhan's essays. He reflected on large questions such as the philosophy and psychology of literature, while at the same time showing a concern for detail and aesthetic accomplishment. He constantly emphasized the act of reading as an activity and literature as the engagement and provocation of such activity. Beloved by writers because he took the problems of writing with the utmost seriousness, his own personal style was marked by self-effacement and irony.
Visa hela texten

"Paulhan had significant impact on late contemporary literary criticism, including structuralism and deconstruction. . . . These essays enhance the historical perspective on poststructuralist critical theory. . . . Recommended."--Choice "On Poetry and Politics offers an excellent sample of [Paulhan's] essays in translations that combine accuracy and felicity."--Contemporary French Civilization "One of the most powerful French writers of the past century. We learn more from one piece by Paulhan about the literature, culture, and politics of twentieth-century France than we learn from reading a whole shelf of books by his contemporaries."--Richard A. Rand, editor of Futures: Of Jacques Derrida "A marvelous book. It exposes the unique, intriguing, and admirable work of Jean Paulhan. These translations will be invaluable to the growing number of scholars and students who have been entering into discussions of Paulhan's work and his world."--Ann Smock, translator of Maurice Blanchot's The Writing of the Disaster "This praiseworthy, pungent, and thought-provoking translation will certainly interest those already familiar with Paulhan, and it will help those unfamiliar with him to situate Paulhan and his work within a broader cultural and historical context. An enjoyable work covering one of the most important figures in the French literary world and the most distinguished essayist of his time."--Warren F. Motte Jr., author of Fables of the Novel: French Fiction since 1990

Jean Paulhan (1884-1968) is often referred to as the "grey eminence" of the publishing world in France, where he played a central role in literary and intellectual life. He was editor of Nouvelle Revue Francaise from 1925 to 1940, and under his direction it became the most influential literary journal of interwar France. Among the authors he encouraged, edited, and published are Antonin Artaud, Jean-Paul Sartre, and Albert Camus. A writer in his own right, Paulhan received the Grand Prix de Litterature of the Academie Francaise in 1951 and was elected to the Academie Francaise in 1963. Jennifer Bajorek is a lecturer in cultural studies at Goldsmiths, University of London, and has translated work by Sarah Kofman and Jacques Derrida. Charlotte Mandell has translated work by Maurice Blanchot, Jean-Luc Nancy, Jean Genet, and Jacques Ranciere, among others. Eric Trudel is an assistant professor of French at Bard College and is the author of La terreur a l'oeuvre: Theorie, poetique et ethique chez Jean Paulhan.