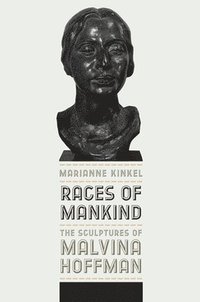 The Sculptures of Malvina Hoffman

av Marianne Kinkel
Inbunden Engelska, 2011-10-07
369
Köp
Spara som favorit
In 1930, Chicago's Field Museum of Natural History commissioned sculptor Malvina Hoffman to produce three-dimensional models of racial types for an anthropology display called the Races of Mankind. In this exceptional study, Marianne Kinkel measures the colossal impact of the ninety-one bronze and stone sculptures on perceptions of race in twentieth-century visual culture, tracing their exhibition from their 1933 debut and nearly four decades at the Field Museum to numerous reuses, repackagings, reproductions, and publications that reached across the world. Employing a keen interdisciplinary approach, Kinkel taps archival sources and period publications to construct a cultural biography of the Races of Mankind sculptures. She examines how Hoffman's collaborations with curators and anthropologists transformed the commission from a traditional physical anthropology display to a fine art exhibit. She also tracks influential exhibitions of statuettes in New York and Paris and photographic reproductions in atlases, maps, and encyclopedias. The volume concludes with the dismantling of the exhibit at the Field Museum in the late 1960s and the redeployment of some of the sculptures in new educational settings. Kinkel demonstrates how the Races of Mankind sculptures participated in various racial paradigms by asserting fixed racial types and racial hierarchies in the 1930s, promoting the notion of a Brotherhood of Man in the 1940s, and engaging Afrocentric discourses of identity in the 1970s. Despite the enormous role the sculptures played in representing race in American visual culture, their history has been largely unrecognized until now. The first sustained examination of this influential group of sculptures, Races of Mankind: The Sculptures of Malvina Hoffman examines how the veracity of race is continually renegotiated through collaborative processes involved in the production, display, and circulation of visual representations.
Visa hela texten

"Elegantly written and eminently readable, this work deals with an important and very current topic: the history of the social construction of race. Through the case study of Malvina Hoffman's Races of Mankind sculptures, Marianne Kinkel gives us a compelling example of how race has been imaged in art and in museum displays."--Mary Jo Arnoldi, curator of African ethnology and arts at the National Museum of Natural History, Smithsonian Institution "A provocative new study. . . . Kinkel shows how the images contributed to a contentious and mutating discourse on race through the end of the 20th century."--Art in America "Kinkel's original research brings to light much archival material, and the amply footnoted text is generously illustrated. . . . Touches on broad themes of racial politics in America."--Library Journal "Covers every detail concerning Malvina Hoffman'sRaces of Mankind--from the artist's career through her extensive preparation to the creation of work and its reception. . . . Recommended"--Choice "'Races of Mankind' staged some strange scenes from a marriage of arts and anthropology."--Journal of the Royal Anthropological Institute "Sculpture, by virtue of its intimate connection with the human body, was given an authoritative place in the history of racial science, and Hoffman's project is perhaps the single most important example of that peculiar intersection of art and science. This is a fascinating study that reveals much about the persistence and contradictions of racial science in its final phase before genetics would transform biology and demolish race as a scientifically viable category."--Kirk Savage, author of Standing Soldiers, Kneeling Slaves: Race, War, and Monument in Nineteenth-Century America

Marianne Kinkel is an associate professor of fine arts at Washington State University.

Acknowledgments Introduction: The Genre of Ethnographic Sculpture; Plaster Casting in Physical Anthropology; Representing Race at the Field Museum 1. Initial Plans for a Physical Anthropology Display 2. Malvina Hoffman as Professional Artist: Becoming a Woman Sculptor; Fashioning an Artistic Persona 3. Producing the Sculptures and Building Consensus: Redefining the Project through Representational Practices; Hoffman's Expedition to Asia; Producing the Sculptures in New York and Paris; Becoming Museum Objects for Display 4. The Hall of the Races of Mankind: Representing Character and Producing Ambiguity; Textual Guidance; Replacing Ambiguity with Scientific Certainty? 5. Life Beyond the Field Museum: Exhibiting Statuettes: During the 1930s; The Trocadero Exhibition; The Grand Central Galleries Exhibition 6. Deploying the Races of Mankind Figures During the 1940s: The Men of the World Exhibition; Mapping Racial Difference; The Map of Mankind and Anti-Racist Pamphlets; Hammond World Atlases and Plates in the Encyclopedia Conclusion: Retraction and Redeployment of the Sculptures in Chicago; Reanimating the Sculptures: OpEd: Fred Wilson Bibliography