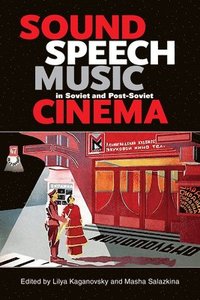 av Lilya Kaganovsky, Masha Salazkina
Inbunden Engelska, 2014-03-07
769
Köp
Spara som favorit
Skickas inom 7-10 vardagar.
Gratis frakt inom Sverige över 159 kr för privatpersoner.
Finns även som
Visa alla 2 format & utgåvor
This innovative volume challenges the ways we look at both cinema and cultural history by shifting the focus from the centrality of the visual and the literary toward the recognition of acoustic culture as formative of the Soviet and post-Soviet experience. Leading experts and emerging scholars from film studies, musicology, music theory, history, and cultural studies examine the importance of sound in Russian, Soviet, and post-Soviet cinema from a wide range of interdisciplinary perspectives. Addressing the little-known theoretical and artistic experimentation with sound in Soviet cinema, changing practices of voice delivery and translation, and issues of aesthetic ideology and music theory, this book explores the cultural and historical factors that influenced the use of voice, music, and sound on Soviet and post-Soviet screens.
Visa hela texten

The essays here on sound and speech may . . . be considered pioneering, while the essays on music are a welcome addition to a small body of scholarship. Taken together, these pieces open a range of possibilities for future research. * Slavic Review * Featuring essays from both established and emerging scholars, the volume will be of great use across disciplines in film studies, musicology, Russian studies, history, and cultural studies. It will be especially valuable for Soviet film scholars interested in the Stalinist period. * Choice * Sound, Speech, Music augurs exciting avenues of inquiry in film and media studies. The volume's multidisciplinary perspectives, often woven with rich cultural analysis, contribute to a larger discourse in the humanities and social sciences. In coeditor Salazkina's words, 'The contributions here are meant to provoke a conversation that may change the way we look at the history of our modernity'. . . . Undoubtedly, they will. * Film Quarterly * Sound, Speech, Music in Soviet and Post-Soviet Cinema is an important book. It contains rich case studies, important theoretical insights, and an admirable interdisciplinary and international focus. Most important, it . . . should serve as a foundational text in the field of Russian/Soviet sound studies. * Kritika * The stellar and insightful scholarship of . . . virtually every essay . . . thus makes good on Salazkina's introductory call for more 'exploration[s]s of the relationship between technology and the aesthetics of production, reception, and consumption of film' in regard to Soviet and post-Soviet sound, while also laying the foundation for even more exhaustive future work. * Cineaste *

Lilya Kaganovsky is Associate Professor of Slavic, Comparative Literature, and Media and Cinema Studies at the University of Illinois, Urbana-Champaign. She is author of How the Soviet Man Was Unmade. Masha Salazkina is Research Chair in Transnational Media Arts and Culture at Concordia University, Montreal. She is author of In Excess: Sergei Eisenstein's Mexico and has published in Cinema Journal, Screen, October, and KinoKultura.

Acknowledgements Note on Transliteration List of Abbreviations Introduction / Masha Salazkina Part I: From Silence to Sound 1. From the History of Graphic Sound in the USSR or Media without a Medium / Nikolai Izvolov 2. Silents, Sound, and Modernism in Dmitry Shostakovich's Score to The New Babylon / Joan Titus 3. To Catch up and Overtake Hollywood: Early Talking Pictures in the Soviet Union / Valerie Pozner 4. ARRK and the Soviet Transition to Sound / Natalia Ryabchikova 5. Making Sense without Speech: The Use of Silence in Early Soviet Sound Film / Emma Widdis Part II: Speech and Voice 6. The Problem of Heteroglossia in Early Soviet Sound Cinema (1930-1935) / Evgeny Margolit 7. Challenging the Voice-of-God in World War II Era Soviet Documentaries / Jeremy Hicks 8. Vocal Changes: Marlon Brando, Innokenti Smoktunovsky, and The Sound of The 1950s / Oksana Bulgakowa 9. Listening to the Inaudible Foreign: Simultaneous Translators and Soviet Experience of Foreign Cinema / Elena Razlogova Part III: Music in Film, or the Soundtrack 10. Kinomuzyka: Theorizing Soviet Film Music in the 1930s / Kevin Bartig 11. Ear of the Beholder: Listening in Muzykal'naia istoriia (1940) / Anna Nisnevich 12. The Music of Landscape: Eisenstein, Prokofiev and the Uses of Music in Ivan The Terrible / Joan Neuberger 13. The Full Illusion of Reality: Repentance, Polystylism, and the Late Soviet Soundscape / Peter Schmelz 14. Russian Rock on Soviet Bones / Lilya Kaganovsky Bibliography Contributors Index