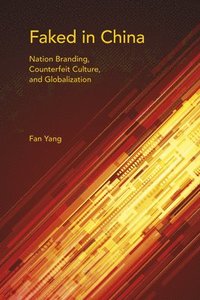 av Fan Yang
Häftad Engelska, 2015-11-15
259
Köp
Spara som favorit
Skickas inom 7-10 vardagar.
Gratis frakt inom Sverige över 159 kr för privatpersoner.
Finns även som
Visa alla 2 format & utgåvor
Faked in China is a critical account of the cultural challenge faced by China following its accession to the World Trade Organization in 2001. It traces the interactions between nation branding and counterfeit culture, two manifestations of the globalizing Intellectual Property Rights (IPR) regime that give rise to competing visions for the nation. Nation branding is a state-sanctioned policy, captured by the slogan "From Made in China to Created in China," which aims to transform China from a manufacturer of foreign goods into a nation that creates its own IPR-eligible brands. Counterfeit culture is the transnational making, selling, and buying of unauthorized products. This cultural dilemma of the postsocialist state demonstrates the unequal relations of power that persist in contemporary globalization.
Visa hela texten

[A] timely work to address key concerns regarding China's engagement with globalisation through the lens of intellectual property rights (IPR), which is commonly known as an economic and legal regime but revisited as a cultural one in the book. * Critical Arts * Scholars interested in the workings of globalization and cultural imperialism will find a great deal of value in Yang's thoughtful and detailed account. * Communication and the Public * Fan Yang has written an unusual book. Faked in China succeeds in doing something that is very difficult: it shifts the terms of the debate by offering a new perspective on IPR. . . will certainly stimulate much discussion about the future of both IPR and the project of reimagining the Chinese nation. * The China Journal * An intricate picture of the cultural politics and transnational power struggles in World Trade Organization-era China. * Global Media and Communication * The author succeeds in the central effort of using real-life examples to demonstrate that counterfeiting in today's China has a cultural meaning and impact beyond its purely economic and productive facets. * Asian Affairs * Fan Yang has written a thoughtful and accessible study of the counterfeit culture of China, specifically probing intellectual property rights (IPR) in terms of regime, culture, and power. * Pacific Affairs * "[T]he undeniable strength of Yang's vision [is] throughout her book, she toggles between the global and national, state and citizen, corporate and private, refusing to reduce these relationships to simplistic binaries. Committed to a critical interrogation of familiar narratives about globalization, Yang takes her readers on a detailed journey through interdependent and multi-layered transnational spaces." * Communication and the Public * Faked in China is an outstanding and highly original work. I am sure it will become required reading in cultural studies disciplines as well as in media and communcations studies. * The China Quarterly *

Fan Yang is Assistant Professor in the Department of Media and Communication Studies at the University of Maryland, Baltimore County.