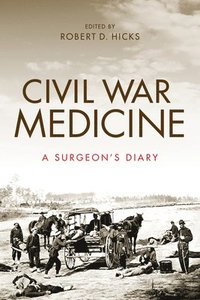 av Robert Hicks
Inbunden Engelska, 2019-05-01
389
Köp
Spara som favorit
Skickas inom 10-15 vardagar.
Fri frakt inom Sverige för privatpersoner.
Finns även som
Visa alla 1 format & utgåvor
In this never before published diary, 29-year-old surgeon James Fulton transports readers into the harsh and deadly conditions of the Civil War as he struggles to save the lives of the patients under his care. Fulton joined a Union army volunteer regiment in 1862, only a year into the Civil War, and immediately began chronicling his experiences in a pocket diary. Despite his capture by the Confederate Army at Gettysburg and the confiscation of his medical tools, Fulton was able to keep his diary with him at all times. He provides a detailed account of the next two years, including his experiences treating the wounded and diseased during some of the most critical campaigns of the Civil War and his relationships with soldiers, their commanders, civilians, other health-care workers, and the opposing Confederate army. The diary also includes his notes on recipes for medical ailments from sore throats to syphilis. In addition to Fulton's diary, editor Robert D. Hicks and experts in Civil War medicine provide context and additional information on the practice and development of medicine during the Civil War, including the technology and methods available at the time, the organization of military medicine, doctor-patient interactions, and the role of women as caregivers and relief workers. Civil War Medicine: A Surgeon's Diary provides a compelling new account of the lives of soldiers during the Civil War and a doctor's experience of one of the worst health crises ever faced by the United States.
Visa hela texten

Robert D. Hicks is Director of the Mutter Museum and Historical Medical Library of the College of Physicians of Philadelphia, where he holds the William Maul Measey Chair for the History of Medicine. He is the author of Voyage to Jamestown: Practical Navigation in the Age of Discovery.

Acknowledgement Introduction: Becoming a Doctor Part I Chapter 1: To Virginia, Measles and Typhoid (Diary, August 18, 1862 to February 19, 1863) Chapter 2: Chancellorsville and "a Spiteful Morose Scamp" (Diary, February 22, 1863 to June 28, 1863) Chapter 3: Searching for Flour at Gettysburg (Diary, June 29, 1863 to July 4, 1863) Chapter 4: Return to Virginia and Christmas with Secesh (Diary, July 5, 1863 to December 25, 1863) Chapter 5: "To bring man in communion with his God" (Diary, December 26, 1863 to January 29, 1864) Chapter 6: Dr. Fulton after 1864 Chapter 7: Commentary Part II Chapter 8: "Examined at the University of Pennsylvania": Dr. Fulton, his Professional Milieu, and Military Medicine 1862-64, by Shauna Devine Chapter 9: "We Got Up and Began to Pack our Medicines": What Dr. Fulton Prescribed, by Guy R. Hasegawa Chapter 10: "We Soon Concluded to Operate": Dr. Fulton's Tools and Methods, by James M. Edmonson Chapter 11: "The Christian Commission also Brought in a Wagon Today": Dr. Fulton, Voluntary Relief Associations, and Women in Hospitals, by Barbra Mann Wall Chapter 12: "We Made Up Soup as Fast as Possible": Nutrition and the 19th Century Male Body, by Margaret Humphreys Chapter 13: "Such is the Character of Many Men": Dr. Fulton's Politics and the Moral and Political Consciousness of Soldiers, by Randall M. Miller Appendices Bibliography Contributors Index