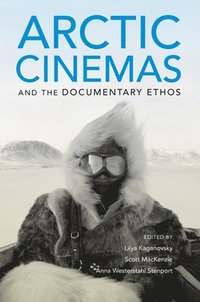 Arctic Cinemas and the Documentary Ethos

av Lilya Kaganovsky, Scott MacKenzie, Anna Westerstahl Stenport
Inbunden Engelska, 2019-02-18
699
Köp
Spara som favorit
Skickas inom 5-8 vardagar.
Fri frakt inom Sverige för privatpersoner.
Finns även som
Visa alla 3 format & utgåvor
Beginning with Robert Flaherty's Nanook of the North (1922), the majority of films that have been made in, about, and by filmmakers from the Arctic region have been documentary cinema. Focused on a hostile environment that few people visit, these documentaries have heavily shaped ideas about the contemporary global Far North. In Arctic Cinemas and the Documentary Ethos, contributors from a variety of scholarly and artistic backgrounds come together to provide a comprehensive study of Arctic documentary cinemas from a transnational perspective. This book offers a thorough analysis of the concept of the Arctic as it is represented in documentary filmmaking, while challenging the notion of "The Arctic" as a homogenous entity that obscures the environmental, historical, geographic, political, and cultural differences that characterize the region. By examining how the Arctic is imagined, understood, and appropriated in documentary work, the contributors argue that such films are key in contextualizing environmental, indigenous, political, cultural, sociological, and ethnographic understandings of the Arctic, from early cinema to the present. Understanding the role of these films becomes all the more urgent in the present day, as conversations around resource extraction, climate change, and sovereignty take center stage in the Arctic's representation.
Visa hela texten

Lilya Kaganovsky is Professor of Slavic, Comparative Literature, and Media & Cinema Studies at the University of Illinois, Urbana-Champaign. She is author of How the Soviet Man was Unmade and The Voice of Technology: Soviet Cinema's Transition to Sound, 1928-1935. Scott MacKenzie is Associate Professor of Film and Media, Queen's University. His books include: Cinema and Nation (with Mette Hjort); Film Manifestos and Global Cinema Cultures; and (with Anna Westerstahl Stenport) Films on Ice: Cinemas of the Arctic. Anna Westerstahl Stenport is Professor and Chair of the School of Modern Languages at the Georgia Institute of Technology. She is editor of (with Scott MacKenzie) Films on Ice: Cinemas of the Arctic, and (with Lill-Ann Koerber and Scott MacKenzie) Arctic Environmental Modernities: From the Age of Polar Exploration to the Era of the Anthropocene and author of Nordic Film Classics: Lukas Moodysson's 'Show Me Love'.