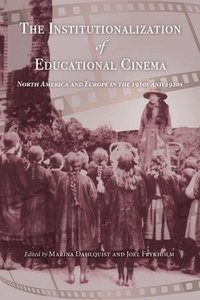 The Institutionalization of Educational Cinema

av Marina Dahlquist, Joel Frykholm
Häftad Engelska, 2020-01-14
389
Köp
Spara som favorit
Finns även som
Visa alla 3 format & utgåvor
The potential of films to educate has been crucial for the development of cinema intended to influence culture, and is as important as conceptions of film as a form of art, science, industry, or entertainment. Using the concept of institutionalization as a heuristic for generating new approaches to the history of educational cinema, contributors to this volume study the co-evolving discourses, cultural practices, technical standards, and institutional frameworks that transformed educational cinema from a convincing idea into an enduring genre. The Institutionalization of Educational Cinema examines the methods of production, distribution, and exhibition established for the use of educational films within institutions-such as schools, libraries, and industrial settings in various national and international contexts and takes a close look at the networks of organizations, individuals, and government agencies that were created as a result of these films' circulation. Through case studies of educational cinemas in different North American and European countries that explore various modes of institutionalization of educational film, this book highlights the wide range of vested interests that framed the birth of educational and nontheatrical cinema.
Visa hela texten

A crucial contribution to the study of how educational cinema was created, adopted, and disseminated, as well as how it came to serve a range of different political agendas in the early part of the 20th century. -- Leonora Masini * Canadian Journal of Film Studies *

Marina Dahlquist is Associate Professor of Cinema Studies at Stockholm University. She is editor of Exploring Perilous Pauline: Pearl White and the Serial Film Craze and co-editor (with Doron Galili, Jan Olsson, and Valentine Robert) of Corporeality in Early Cinema: Viscera, Skin, and Physical Form (IUP, 2018). Joel Frykholm is Research Associate at Stockholm University, Department of Media Studies, Section for Cinema Studies. He is author of George Kleine and American Cinema: The Movie Business and Film Culture in the Silent Era. Oliver Gaycken is Associate Professor of English and a core faculty member of the Film Studies and Comparative Literature Programs at the University of Maryland, College Park. He is author of Devices of Curiosity: Early Cinema and Popular Science. Frank Kessler is Professor of Media History at Utrecht University, the Netherlands and Director of the Research Institute for Cultural Inquiry. He is co-editor (with Sarah Dellmann) of A Million Pictures (IUP, 2018), author of Mise en scene, and co-editor (with Nanna Vergoeff) of Networks of Entertainment (IUP, 2008). Sabine Lenk is Researcher in the Belgian Excellence of Science project "B-Magic. The Magic Lantern and Its Cultural Impact as Visual Mass Medium in Belgium, (1830-1940)" at Antwerp University and Universite libre de Bruxelles. She is author of Vom Tanzsaal zum Filmtheater. Eine Kinogeschichte Dussedorfs. Jan Olsson is Professor of Cinema Studies at Stockholm University. He is co-editor (with Marina Dahlquist, Doron Galili, and Valentine Robert) of Corporeality in Early Cinema: Viscera, Skin, and Physical Form (IUP, 2018), author of Hitchcock a la Carte, and co-editor (with Kingsley Bolton) of Media, Popular Culture, and the American Century (IUP, 2011). Floris Paalman is Senior Lecturer of Media Studies at the University of Amsterdam and a staff member of the Master's Programs in Film Studies and in the Preservation and Presentation of the Moving Image. He is author of Cinematic Rotterdam: The Times and Tides of a Modern City. Tom Rice is Senior Lecturer in Film Studies at the University of St Andrews. He is author of White Robes, Silver Screens: Movies and the Making of the Ku Klux Klan (IUP, 2016). Katy Peplin holds a Ph.D. in Screen Arts and Cultures from the University of Michigan. Her research focuses on non-fiction film. Gregory A. Waller is Provost Professor and Director of Cinema and Media Studies in the Media School at Indiana University. He is author of Main Street Amusements: Movies and Commercial Entertainment in a Southern City, 1896-1930 and editor of Film History. Zoe Druick is Professor of Communication and Associate Dean of Graduate Studies at Simon Fraser University. She is author of Projecting Canada: Government Policy and Documentary Film at the National Film Board and The Grierson Effect: Tracing Documentary's International Movement.

Acknowledgments Introduction / Marina Dahlquist and Joel Frykholm 1. Platforms for Learning / Jan Olsson 2. The Kinoreformbewegung in Germany: Creating an Infrastructure for Pedagogical Screenings / Sabine Lenk and Frank Kessler 3. One Family: The Movement of Educational Film in Britain and its Empire / Tom Rice 4. Far and Close: The Gemeentelijke Schoolbioscoop in Rotterdam / Floris Paalman 5. Partners in Screen Education: Philanthropic Organizations and the Film Industry / Marina Dahlquist 6. The Best Teachers and the Best Preachers: Film, University Extension, and the Project of Assimilation in Alberta, 1917-1936 / Zoe Druick 7. "A Casual Glance Reveals a Perfect Mine of Treasures": George Kleine's Catalogue of Educational Motion Pictures (1910) / Oliver Gaycken 8. George Kleine and the Institutional Film Exchange: An Experiment in Nontheatrical Film Distribution, 1921-1929 / Joel Frykholm 9. Ford Films and Ford Viewers: Examining "Nontheatrical" Films in the Theaters and Beyond / Katy Peplin 10. Institutionalizing Educational Cinema in the United States during the Early 1920s / Gregory A. Waller