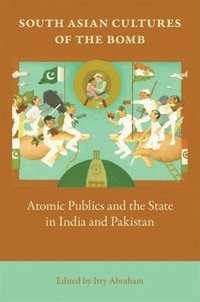 South Asian Cultures of the Bomb

Atomic Publics and the State in India and Pakistan

For the first time scholars in this book present a multivoiced assessment of the subtle sociocultural effects of the 1998 nuclear tests in India and Pakistan. ...This book proves conclusively, again, that a partition done haphazardly in 1947 led to very different experiences in the evolution of military-industrial-political complexes in each country. But where others have focused largely on states and strategic cultures, these authors, under Abraham's able editorship, show how these two atomic publics are constructed and interact with their surroundings.Vol. 83.2 June 2010 -- Robert S. Anderson * Simon Fraser University, Burnaby, Canada * [The author] Abraham has brought together scholars writing on both Pakistan and India to reflect on the place of science, the atomic question, popular culture and the state. In doing so, he has managed to push forward a perspective that is transnational in a meaningful way for the subcontinent. . . . Vol. 43.2 June 2010 -- Jahnavi Phalkey * British Journal for the History of Science *

Itty Abraham is Associate Professor of Government and Director of the South Asia Institute at The University of Texas, Austin. He is author of The Making of the Indian Atomic Bomb and editor (with Willem van Schendel) of Illicit Flows and Criminal Things: States, Borders, and the Other Side of Globalization (IUP, 2006).