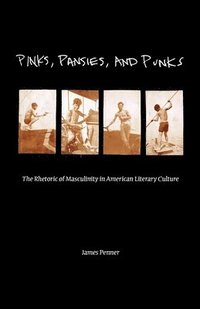 The Rhetoric of Masculinity in American Literary Culture

av James Penner
Häftad Engelska, 2010-12-23
279
Köp
Spara som favorit
Pinks, Pansies, and Punks charts the construction of masculinity within American literary culture from the 1930s to the 1970s. Penner documents the emergence of "macho criticism," and explores how debates about "hard" and "soft" masculinity influenced the class struggles of the 1930s, anti-communism in the 1940s and 1950s, and the clash between the Old Left and the New Left in the 1960s. By extending literary culture to include not just novels, plays, and poetry, but diaries, journals, manifestos, screenplays, and essays on psychology and sociology, Penner unveils the multiplicity of gender attitudes that emerge in each of the decades he addresses.
Visa hela texten

Exhaustively researched and meticulously detailed, James Penner's [book] cuts an insightful swath through fifty years of 20th century macho literary criticism . . . Scholars, historians, and culture critics will have much to chew on here. May 2011 * Reno Tahoe Tonight * With a literary fluid style and a pleasant wit, Penner steers the reader through five decades of fluctuating visions of masculinity, not only in novels and criticism, but also in various artistic endeavors and in 'cultured society' as a whole. ...[A]n invaluable book.8/22/11 * GRAAT * A nice addition to the steadily lengthening shelf of literary gender studies, this perceptive, well-researched volume ... surveys a vast landscape of eclectic literary achievement: from hypermasculine warrior myths, anticommunist crusades, and the New Critics to Gore Vidal, Tennessee Williams, Arthur Miller, Norman Mailer, and William S. Burroughs ... [this] study merits a long look. Summing Up: Highly recommendedJuly 2011 * Choice * Pinks, Pansies, and Punks offers an indispensable text that compellingly theorizes the significance of masculinity's role in literary culture and the twentieth-century social contexts that shaped-and were shaped by-it. * Twentieth Century Literature * All in all it [Pinks, Pansies, and Punks] is a recommendable, as informative introduction to the American culture and Gendergeschichte [gender studies] of the middle twentieth century. * Orbis Litterarum * Penner's study is an ambitious and provocative look at mid-century delineations of masculinity in American literary culture. . . . [It] asks readers to reconsider and expand the horizons of their understanding of twentieth-century male identity, and to reflect on their critical efforts to fit writers, artists, and other critics into specific categories and definitions. In many ways, this is what makes it such a rich and potentially valuable a contribution not only to masculinity and gender studies, but to American literary and cultural studies as well. * College Literature * In compelling ways, Penner navigates through layered textual materials to show how multiple configurations of masculinity can and do co-exist . . . This book proves a very interesting study for those interested in Gender Studies, Cultural Studies, or Literary Criticism. Vol. 40:6 * Women's Studies *

James Penner is Assistant Professor of English at the University of Puerto Rico.