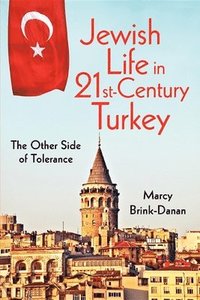 The Other Side of Tolerance

av Marcy Brink-Danan
Häftad Engelska, 2011-12-06
289
Köp
Spara som favorit
Finns även som
Visa alla 2 format & utgåvor
Turkey is famed for a history of tolerance toward minorities, and there is a growing nostalgia for the "Ottoman mosaic." In this richly detailed study, Marcy Brink-Danan examines what it means for Jews to live as a tolerated minority in contemporary Istanbul. Often portrayed as the "good minority," Jews in Turkey celebrate their long history in the region, yet they are subject to discrimination and their institutions are regularly threatened and periodically attacked. Brink-Danan explores the contradictions and gaps in the popular ideology of Turkey as a land of tolerance, describing how Turkish Jews manage the tensions between cosmopolitanism and patriotism, difference as Jews and sameness as Turkish citizens, tolerance and violence.
Visa hela texten

The book provides much important information and analysis on important issues regarding contemporary Turkish Jews, though some of the theoretical parts might be of more interest to anthropologists. The study is an important contribution to our knowledge of Jewish life in the 21st century Middle East in general and Turkey in particular, and is of relevance as well for those interested in minority and culture studies. * AJL Reviews * Brink-Danan's volume offers a complex and thought-provoking portrait of Jewish life in twenty-first-century Turkey through the compelling lens of linguistic anthropology. It not only elucidates multiple facets of a Jewish community generally overlooked by scholars, but also encourages us to rethink the nature of 'cosmopolitanism,' 'tolerance,' and minority politics more broadly through the example of Turkey. * H-Judaic H-Net * Brink-Danan . . . ventures beyond the bland and the predictable and produces a thought-provoking book about an intriguing Jewish community in a fascinating Muslim country. * The Canadian Jewish News * [A] marvelously provocative book . . . Highly recommended. * Choice * [A]n outstanding study . . . . [I]t solves the riddles of Turkish Jewish culture by offering a critical contribution to the discussion of cosmopolitanism. * Comparative Studies in Society and History * Marcy Brink-Danan's study offers a rare and insightful view of the multilayered dynamics between and profiles of individuals peopling Istanbul's Jewish community. Jewish Life in 21st-Century Turkey is at once an important ethnographic investigation and a sociolinguistic analysis. As such, it stands apart from other studies of Turkey's contemporary Jews. * Slavic Review *

Preface: The Ends and Beginnings of 1992 Acknowledgements Introduction 1. Tolerance, Difference, and Citizenship 2. Cosmopolitan Signs: Names as Foreign and Local 3. The Limits of Cosmopolitanism 4. Performing Difference: Turkish Jews on The National Stage 5. Intimate Negotiations: Turkish Jews Between Stages 6. The One Who Writes Difference: Inside Secrecy Conclusion Notes References Index