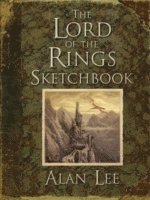 The Lord of the Rings Sketchbook

av Alan Lee
(2 röster)
Inbunden Engelska, 2005-09-01
249
Köp
Spara som favorit
Skickas inom 5-8 vardagar.
Gratis frakt inom Sverige över 159 kr för privatpersoner.
Finns även som
Visa alla 1 format & utgåvor
A sumptuous large-format hardback containing sketches and paintings from the illustrated Lord of the Rings, together with brand new and previously unseen material. In this large-format hardback Alan Lee reveals in pictures and in words how he created the images in the authorised illustrated edition of The Lord of the Rings. These images would prove so powerful, matching perfectly with Tolkien's own vision, that they would eventually define the look of Peter Jackson's movie trilogy and earn Alan a coveted Academy Award. The book is filled with over 150 of his sketches and early conceptual pieces to show how the project progressed from idea to finished art. It also contains 20 colour paintings reproduced in full-page glory, together with numerous examples of his conceptual art produced for the films and brand new pieces drawn specially for this book. It also includes an exclusive foreword written by Sir Ian McKellen. The Lord of the Rings Sketchbook provides a fascinating insight into the imagination of the man who painted Tolkien's vision, firstly onto the page and then in three dimensions on the cinema screen. It will also be of interest to many of the 100,000 people who have bought the illustrated Lord of the Rings as well as for budding artists and illustrators interested in unlocking the secrets of book illustration.
Visa hela texten

'Alan Lee's artwork has a beauty and lyricism about it. His art captured what I hoped to capture with the films.' Peter Jackson 'Among the greatest works of imaginative fiction of the 20th century.' Sunday Telegraph 'An extraordinarily imaginative work, part saga, part allegory, and wholly exciting.' The Times 'A grand piece of work in both conception and execution.' Daily Telegraph

Alan Lee was born in Middlesex in 1947. His illustrated books include Faeries (with Brian Froud), Castles and Merlin Dreams, and has worked on such prestigious films as Erik the Viking (Terry Gilliam), Legend (Ridley Scott), and the acclaimed NBC miniseries Merlin. He is best known however for his work on the books The Hobbit and The Lord of the Rings, and now the film version.