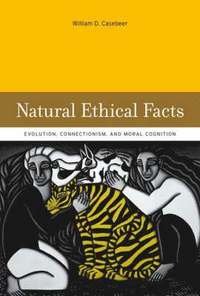 av William D Casebeer
Inbunden Engelska, 2003-08-01
119
Köp
Spara som favorit
Specialorder (osäker tillgång). Skickas inom 11-20 vardagar.
Fri frakt inom Sverige över 159 kr för privatpersoner.
Finns även som
Visa alla 3 format & utgåvor
In Natural Ethical Facts William Casebeer argues that we can articulate a fully naturalized ethical theory using concepts from evolutionary biology and cognitive science, and that we can study moral cognition just as we study other forms of cognition. His goal is to show that we have "softly fixed" human natures, that these natures are evolved, and that our lives go well or badly depending on how we satisfy the functional demands of these natures. Natural Ethical Facts is a comprehensive examination of what a plausible moral science would look like. Casebeer begins by discussing the nature of ethics and the possible relationship between science and ethics. He then addresses David Hume's naturalistic fallacy and G. E. Moore's open-question argument, drawing on the work of John Dewey and W. V. O. Quine. He then proposes a functional account of ethics, offering corresponding biological and moral descriptions. Discussing in detail the neural correlates of moral cognition, he argues that neural networks can be used to model ethical function. He then discusses the impact his views of moral epistemology and ontology will have on traditional ethical theory and moral education, concluding that there is room for other moral theories as long as they take into consideration the functional aspect of ethics; the pragmatic neo-Aristotelian virtue theory he proposes thus serves as a moral "big tent." Finally, he addresses objections to ethical naturalism that may arise, and calls for a reconciliation of the sciences and the humanities. "Living well," Casebeer writes, "depends upon reweaving our ethical theories into the warp and woof of our scientific heritage, attending to the myriad consequences such a project will have for the way we live our lives and the manner in which we structure our collective moral institutions."
Visa hela texten

Natural Ethical Facts is well-documented and makes a valuable contribution to the ongoing dialogue between biology and morality. -Research News & Opportunities in Science and Theology

William Casebeer is Assistant Professor of Philosophy at the US Air Force Academy.