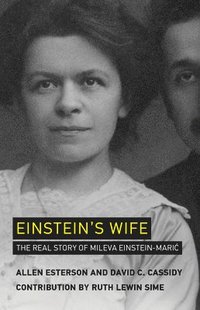 The Real Story of Mileva Einstein-Maric

av Allen Esterson, David C Cassidy
Inbunden Engelska, 2019-03-15
259
Köp
Spara som favorit
Skickas inom 5-8 vardagar.
Fri frakt inom Sverige för privatpersoner.
Finns även som
Visa alla 1 format & utgåvor
Was Einstein's first wife his uncredited coauthor, unpaid assistant, or his unacknowledged helpmeet? The real "Mileva Story." Albert Einstein's first wife, Mileva Einstein-Maric, was forgotten for decades. When a trove of correspondence between them beginning in their student days was discovered in 1986, her story began to be told. Some of the tellers of the "Mileva Story" made startling claims: that she was a brilliant mathematician who surpassed her husband, and that she made uncredited contributions to his most celebrated papers in 1905, including his paper on special relativity. This book, based on extensive historical research, uncovers the real "Mileva Story." Mileva was one of the few women of her era to pursue higher education in science; she and Einstein were students together at the Zurich Polytechnic. Mileva's ambitions for a science career, however, suffered a series of setbacks-failed diploma examinations, a disagreement with her doctoral dissertation adviser, an out-of-wedlock pregnancy by Einstein. She and Einstein married in 1903 and had two sons, but the marriage failed. Was Mileva her husband's uncredited coauthor, unpaid assistant, or his essential helpmeet? It's tempting to believe that she was her husband's secret collaborator, but the authors of Einstein's Wife look at the actual evidence, and a chapter by Ruth Lewin Sime offers important historical context. The story they tell is that of a brave and determined young woman who struggled against a variety of obstacles at a time when science was not very welcoming to women.
Visa hela texten

Allen Esterson was a Lecturer in Mathematics and Physics at Southwark College in London before his retirement. David C. Cassidy is Professor Emeritus at Hofstra University. Ruth Lewin Sime is Professor Emerita in the Department of Chemistry at Sacramento City College.