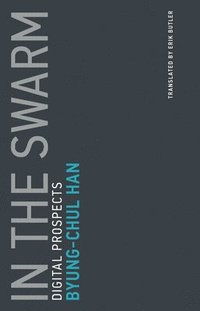 In the Swarm: Volume 3

av Byung-Chul Han
Häftad Engelska, 2017-04-07
145
Bevaka
Spara som favorit
Tillfälligt slut – klicka "Bevaka" för att få ett mejl så fort boken går att köpa igen.
A prominent German thinker argues that-contrary to "Twitter Revolution" cheerleading-digital communication is destroying political discourse and political action. The shitstorm represents an authentic phenomenon of digital communication. -from In the Swarm Digital communication and social media have taken over our lives. In this contrarian reflection on digitized life, Byung-Chul Han counters the cheerleaders for Twitter revolutions and Facebook activism by arguing that digital communication is in fact responsible for the disintegration of community and public space and is slowly eroding any possibility for real political action and meaningful political discourse. In the predigital, analog era, by the time an angry letter to the editor had been composed, mailed, and received, the immediate agitation had passed. Today, digital communication enables instantaneous, impulsive reaction, meant to express and stir up outrage on the spot. "The shitstorm," writes Han, "represents an authentic phenomenon of digital communication." Meanwhile, the public, the senders and receivers of these communications have become a digital swarm-not a mass, or a crowd, or Negri and Hardt's antiquated notion of a "multitude," but a set of isolated individuals incapable of forming a "we," incapable of calling dominant power relations into question, incapable of formulating a future because of an obsession with the present. The digital swarm is a fragmented entity that can focus on individual persons only in order to make them an object of scandal. Han, one of the most widely read philosophers in Europe today, describes a society in which information has overrun thought, in which the same algorithms are employed by Facebook, the stock market, and the intelligence services. Democracy is under threat because digital communication has made freedom and control indistinguishable. Big Brother has been succeeded by Big Data.
Visa hela texten

Han is among the philosophers who have interpreted the world not only without seeking to change it... but also without giving sufficient weight to how messy it was before they started paying attention. -Inside Higher Ed

Byung-Chul Han, born in Seoul, is Professor of Philosophy and Cultural Studies at the Universitat der Kunste Berlin (UdK). One of the most widely read philosophers in Europe, he is the author of more than twenty books, includingincluding four previous volumes in the MIT Press Untimely Meditations series, In the Swarm: Digital Prospects, The Agony of Eros, Shanzhai: Deconstruction in Chinese, and Topology of Violence.