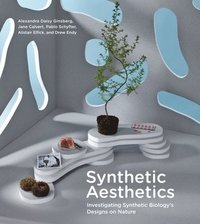 av Alexandra Daisy Ginsberg, Jane Calvert, Pablo Schyfter, Alistair Elfick, Drew Endy
Häftad Engelska, 2017-01-06
374
Köp
Spara som favorit
Finns även som
Visa alla 1 format & utgåvor
As synthetic biology transforms living matter into a medium for making, what is the role of design and its associated values? Synthetic biology manipulates the stuff of life. For synthetic biologists, living matter is programmable material. In search of carbon-neutral fuels, sustainable manufacturing techniques, and innovative drugs, these researchers aim to redesign existing organisms and even construct completely novel biological entities. Some synthetic biologists see themselves as designers, inventing new products and applications. But if biology is viewed as a malleable, engineerable, designable medium, what is the role of design and how will its values apply? In this book, synthetic biologists, artists, designers, and social scientists investigate synthetic biology and design. After chapters that introduce the science and set the terms of the discussion, the book follows six boundary-crossing collaborations between artists and designers and synthetic biologists from around the world, helping us understand what it might mean to 'design nature.' These collaborations have resulted in biological computers that calculate form; speculative packaging that builds its own contents; algae that feeds on circuit boards; and a sampling of human cheeses. They raise intriguing questions about the scientific process, the delegation of creativity, our relationship to designed matter, and, the importance of critical engagement. Should these projects be considered art, design, synthetic biology, or something else altogether? Synthetic biology is driven by its potential; some of these projects are fictions, beyond the current capabilities of the technology. Yet even as fictions, they help illuminate, question, and even shape the future of the field.
Visa hela texten

Synthetic Aesthetics is wise in not attempting a comprehensive survey of this fast changing and much contested industry, but by taking a collaborative approach that attempts to integrate design based questioning with scientific practice, it provides lots of juicy clues about where we could be headed. -PostMatter Synthetic Aesthetics...is a freewheeling book with 20 authors and may irritate conventional scientists-some of the ideas were dreamed up while 'performing a dance based on the myth of the Golem', for example. But it certainly explains the key ideas of the field and leads you to many lateral conversations about what it may become. In the first few chapters, one central concern is what is meant by 'design'. An engineer might think of designing a bridge to a particular specification; a synthetic biologist of designing a microorganism with a new commercial application, pumping out green gasoline for example; but a real designer, a fashion designer, for example, is doing something else. As artist Daisy Ginsberg puts it, design 'is about possibility', the unimagined things that life could be. Synthetic biology, she writes, has been addressing 'humanity's needs'-limitless fuel, for example-rather than 'our needs as individual, diverse and complex humans'. This is refreshing: worries about the separation between the top-down design of the future and those who must live with the designs are quite rare in science. -New Scientist Far from an ivory tower text, Synthetic Aesthetics is a true collaboration between scientists, designers and thinkers who cross borders and disciplines to test the limits of biology in the digital world. Can bacteria be programmed to alert you when you're ill? Will we one day devise a synthetic organism that can suck up pollution in the wild? Is it possible to decentralise the petrochemical industry and distribute production and power? How long until machines take on lives of their own? Sooner than most of us imagine, it seems. By joining forces, the authors are able to bring disparate theories into the world, closer to life and into language even the laymen can understand. -Wallpaper