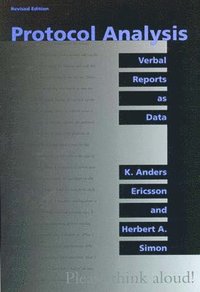 av K Anders Ericsson, Herbert A Simon
Häftad Engelska, 1993-04-01
499
Köp
Spara som favorit
Since the publication of Ericsson and Simon's ground-breaking work in the early 1980s, verbal data has been used increasingly to study cognitive processes in many areas of psychology, and concurrent and retrospective verbal reports are now generally accepted as important sources of data on subjects' cognitive processes in specific tasks. In this revised edition of the book that first put protocol analysis on firm theoretical ground, the authors review major advances in verbal reports over the past decade, including new evidence on how giving verbal reports affects subjects' cognitive processes, and on the validity and completeness of such reports. In a substantial new preface Ericsson and Simon summarize the central issues covered in the book and provide an updated version of their information-processing model, which explains verbalization and verbal reports. They describe new studies on the effects of verbalization, interpreting the results of these studies and showing how their theory can be extended to account for them. Next, they address the issue of completeness of verbally reported information, reviewing the new evidence in three particularly active task domains. They conclude by citing recent contributions to the techniques for encoding protocols, raising general issues, and proposing directions for future research. All references and indexes have been updated.
Visa hela texten

K. Anders Ericsson holds the Dr. Edward Conradi Eminent Scholar Chair of Psychology at Florida State University. Herbert A. Simon (1916-2001) was an influential psychologist and political scientist, awarded the 1978 Nobel Prize in Economics and the 1975 Turing Award (with Allen Newell). His many published books include Models of Bounded Rationality and Models of My Life (both published by the MIT Press)..