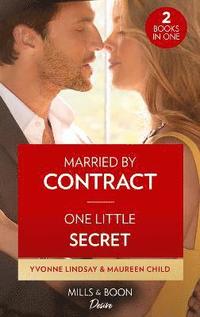 Married By Contract / One Little Secret

Married by Contract / One Little Secret (Dynasties: the Carey Center)

av Yvonne Lindsay, Maureen Child
Häftad Engelska, 2021-12-09
106
Köp
Spara som favorit
Married by Contract by Yvonne Lindsay Their night together had consequences, now their nuptials are non-negotiable. New York fashionista Rosalind Banks spent the most passionate night of her life with a total stranger! Now Ros is having Gabriel Carrington's baby and he just made her an offer she can't refuse... Gabe needs a wife and an heir, with a marriage on paper only. But will inconvenient chemistry derail their marriage of convenience or take it to a whole new level? One Little Secret by Maureen Child The man who got away is back and a little surprise awaits him... Sadie Harris couldn't resist charming entrepreneur Justin Carey. And then she made the mistake of keeping her pregnancy a secret after they parted ways... Now he's back to make a deal with her family-and meet his son for the first time. With emotions running high, Sadie and Justin soon cross the line from anger to passion...to possibly more. But will Justin stay this time?
Visa hela texten

A typical Piscean, award winning USA Today! bestselling author, Yvonne Lindsay, has always preferred the stories in her head to the real world. Which makes sense since she was born in Middle Earth. Married to her blind date sweetheart and with two adult children, she spends her days crafting the stories of her heart and in her spare time she can be found with her nose firmly in someone else's book. Maureen Child is the author of more than 130 romance novels and novellas that routinely appear on bestseller lists and have won numerous awards, including the National Reader's Choice Award. A seven-time nominee for the prestigous RITA award from Romance Writers of America, one of her books was made into a CBS-TV movie called THE SOUL COLLECTER. Maureen recently moved from California to the mountains of Utah and is trying to get used to snow.