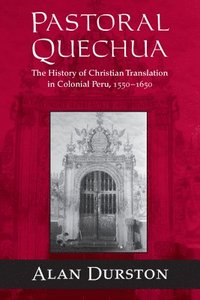 The History of Christian Translation in Colonial Peru, 1550-1654

av Alan Durston
Häftad Engelska, 2007-10-01
739
Köp
Spara som favorit
Skickas inom 10-15 vardagar.
Fri frakt inom Sverige för privatpersoner.
Finns även som
Visa alla 2 format & utgåvor
Pastoral Quechua explores the story of how the Spanish priests and missionaries of the Catholic church in post-conquest Peru systematically attempted to "incarnate" Christianity in Quechua, a large family of languages and dialects spoken by the dense Andes populations once united under the Inca empire. By codifying (and imposing) a single written standard, based on a variety of Quechua spoken in the former Inca capital of Cuzco, and through their translations of devotional, catechetical, and liturgical texts for everyday use in parishes, the missionary translators were on the front lines of Spanish colonialism in the Andes. The Christian pastoral texts in Quechua are important witnesses to colonial interactions and power relations. Durston examines the broad historical contexts of Christian writing in Quechua; the role that Andean religious images and motifs were given by the Spanish translators in creating a syncretic Christian-Andean iconography of God, Christ, and Mary; the colonial linguistic ideologies and policies in play; and the mechanisms of control of the subjugated population that can be found in the performance practices of Christian liturgy, the organization of the texts, and even in certain aspects of grammar.
Visa hela texten

"Pastoral Quechua is a wonderful volume that will be of interest to a broad range of scholars including historians, linguists, anthropologists, as well as scholars in all fields interested in Peru. The study focuses on the practice of translation, as the author states, but it is much more than that. It is a meticulously researched work that provides careful linguistic analysis conceptualized within an historical study of Catholic evangelization in colonial Peru." -- Thomas B. F. Cummins, Dumbarton Oaks Professor of Pre-Columbian and Colonial Art, Harvard University "Durston's book explains how pastoral Quechua developed and why it never became a universal written standard for nonpastoral uses. Some of the analyses are little masterpieces of research. . . . His analysis of Ore's hymns and its intertexts is a marvel. His study of the ways in which Christian writers substituted Andean tropes and images for European ones is another masterpiece of analysis." -Hispanic American Historical Review

Alan Durston is associate professor of history at York University. He is the author of Pastoral Quechua: The History of Christian Translation in Colonial Peru, 1550-1650 (University of Notre Dame Press, 2007).