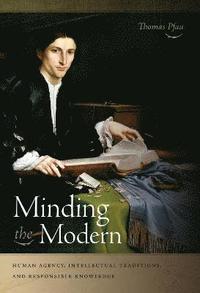 av Thomas Pfau
Häftad Engelska, 2015-02-15
359
Köp
Spara som favorit
Skickas inom 7-10 vardagar.
Gratis frakt inom Sverige över 159 kr för privatpersoner.
Finns även som
Visa alla 2 format & utgåvor
In this brilliant study, Thomas Pfau argues that the loss of foundational concepts in classical and medieval Aristotelian philosophy caused a fateful separation between reason and will in European thought. Pfau traces the evolution and eventual deterioration of key concepts of human agency-will, person, judgment, action-from antiquity through Scholasticism and on to eighteenth-century moral theory and its critical revision in the works of Samuel Taylor Coleridge. Featuring extended critical discussions of Aristotle, Gnosticism, Augustine, Aquinas, Ockham, Hobbes, Shaftesbury, Mandeville, Hutcheson, Hume, Adam Smith, and Coleridge, this study contends that the humanistic concepts these writers seek to elucidate acquire meaning and significance only inasmuch as we are prepared positively to engage (rather than historicize) their previous usages. Beginning with the rise of theological (and, eventually, secular) voluntarism, modern thought appears increasingly reluctant and, in time, unable to engage the deep history of its own underlying conceptions, thus leaving our understanding of the nature and function of humanistic inquiry increasingly frayed and incoherent. One consequence of this shift is to leave the moral self-expression of intellectual elites and ordinary citizens alike stunted, which in turn has fueled the widespread notion that moral and ethical concerns are but a special branch of inquiry largely determined by opinion rather than dialogical reasoning, judgment, and practice. A clear sign of this regression is the present crisis in the study of the humanities, whose role is overwhelmingly conceived (and negatively appraised) in terms of scientific theories, methods, and objectives. The ultimate casualty of this reductionism has been the very idea of personhood and the disappearance of an adequate ethical language. Minding the Modern is not merely a chapter in the history of ideas; it is a thorough phenomenological and metaphysical study of the roots of today's predicaments.
Visa hela texten

"The sheer depth of Pfau's scholarship must deter criticism. His philosophical claims are underwritten by his dazzling erudite close readings, and he traverses with ease a vast intellectual terrain. . . . The case that Pfau makes is compelling, and its urgency . . . is hardly over-stated." -- European Romantic Review "Minding the Modern is comparable to Alasdair MacIntyre's Whose Justice? Which Rationality? and Charles Taylor's A Secular Age. With extraordinary erudition, Pfau locates the philosophical developments that contributed to the agony of the modern mind. Moreover, he helps us see why many who exemplify that intellectual stance do not recognize their own despair. Suffice it to say, this is an immensely important book that hopefully will be read widely and across the disciplines." -- Stanley Hauerwas, Gilbert T. Rowe Professor of Theological Ethics, Duke Divinity School "Thomas Pfau's Minding the Modern, a groundbreaking work that may aptly be compared to studies by Charles Taylor and Alasdair MacIntyre, develops a sustained argument about the concept of human agency from Aristotle to the present day. Against the loss of deliberative agency, Pfau persuasively demonstrates why the idea of the person remains indispensable to humanistic inquiry today." -- Journal of Theological Studies "Pfau's book is an expression of profound faith and conviction . . . the problems posed by voluntarism are tracked through a wide range of materials and it is here that we see Pfau at his best." -- Studies in English Literature 1500-1901 "As with many cartographies of modernity, Pfau covers enormous intellectual ground here. But by limiting his scope to the metamorphosis affecting the relationship between the will and the intellect, he sheds much needed light on how the once indissoluble, metaphysical link between human agency and responsible knowledge gradually became severed. . . . This is, above all, a scholarly work of remembering: both what it once meant to be human and how those ancient possibilities might revitalize a contemporary area of decay." -- Religious Studies Review "Thomas Pfau's argument is bold: concepts of personhood-rationality, consciousness, judgment, responsibility, and will-have, since the thirteenth century, been so shorn of their distinction and truth value that they have crippled all modern formulations of human agency. More than a decline narrative, Minding the Modern is a thick narration of the systematic forgetting of the hard-won content of these concepts, counterilluminated by a few resilient thinkers who refused to participate in modernity's collective amnesia. . . . the consequent depth and richness of the interpretation of these canonical texts-nimbly supported with scholarly citation and counterinterpretation-will not fail to impress and, I think, consistently persuade." -- The Journal of Religion "[A] learned, deeply important, and accomplished study . . . that calls upon a set of interpretive and communal traditions that, far from being fossilized, contain radical and renovating power, but whose power can be called on, extended, elaborated, and applied to the present and future only if one knows that those traditions can and do remain alive and available, and that we ignore or pronounce them 'past' at our peril. The sweep and comprehensiveness of the work are remarkable. This is not a history of philosophy at all. It is a call for us to rededicate ourselves to a serious, demanding practice of humanistic studies." -- James Engell, Gurney Professor of English and Professor of Comparative Literature, Harvard University ". . . Minding the Modern is highly stimulating, methodologically self-aware and admirably audacious . . . . Part One offers a brilliant methodological reflection on the commitments and aims of the book. The seventy pages of these Prolegomena count among the most original and inspiring parts of the book and hopefully

Thomas Pfau is the Alice Mary Baldwin Professor of English and professor of German at Duke University, with a secondary appointment on the Duke Divinity School faculty.