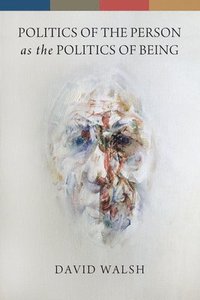 av David Walsh
Häftad Engelska, 2015-12-30
449
Köp
Spara som favorit
Skickas inom 10-15 vardagar.
Fri frakt inom Sverige för privatpersoner.
Finns även som
Visa alla 2 format & utgåvor
Readers expecting a traditional philosophical work will be surprised and delighted by David Walsh's Politics of the Person as the Politics of Being, his highly original reflection on the transcendental nature of the person. A specialist in political theory, Walsh breaks new ground in this volume, arguing, as he says in the introduction, "that the person is transcendence, not only as an aspiration, but as his or her very reality. Nothing is higher. That is what Politics of the Person as the Politics of Being strives to acknowledge." The analysis of the person is the foundation for thinking about political community and human dignity and rights. Walsh establishes his notion of the person in the first four chapters. He begins with the question as to whether science can in any sense talk about persons. He then examines the person's core activities, free choice and knowledge, and reassesses the claims of the natural sciences. He considers the ground of the person and of interpersonal relationships, including our relationship with God. The final three chapters explore the unfolding of the person, imaginatively in art, in the personal "time" of history, and in the "space" of politics. Politics of the Person as the Politics of Being is a new way of philosophizing that is neither subjective nor objective but derived from the persons who can consider such perspectives. The book will interest students and scholars in contemporary political philosophy, philosophy of religion, and any groups interested in the person, personalism, and metaphysics.
Visa hela texten

"Politics of the Person as the Politics of Being is a brilliant, eloquent, and luminous meditative study, filled necessarily with paradox, owing to the limitations of analysis and of language, of which Walsh is fully cognizant, on the meaning of the person. This is an outstanding piece of work by one of the foremost scholars of his generation." -Barry Cooper, University of Calgary.

David Walsh is professor of politics at the Catholic University of America. He is the author of a three-volume study of modernity addressing the totalitarian crisis, the resurgence of liberal democracy, and the philosophical revolution of the modern world. The volumes include: After Ideology: Recovering the spiritual Foundations of Freedom (HarperSanFrancisco, 1990), The Growth of the Liberal Soul (University of missouri Press, 1997), and The Modern Philosophical Revolution: The Luminosity of Existence (Cambridge University Press, 2008). He has also published (University Press of Florida, 1983), The Third Millennium: Reflections on Faith and Reason (Georgetown University Press, 1999), and Guarded By Mystery: Meaning in a Postmodern Age (Catholic University of America Press, 1999). Walsh has edited three volumes of The Collected Works of Eric Voegelin.