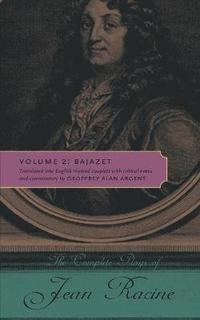 The Complete Plays of Jean Racine

av Jean Racine
Häftad Engelska, 2011-01-01
439
Köp
Spara som favorit
Skickas inom 10-15 vardagar.
Fri frakt inom Sverige för privatpersoner.
Finns även som
Visa alla 2 format & utgåvor
This is the second volume of a projected translation into English of all twelve of Jean Racine's plays-only the third time such a project has been undertaken in the three hundred years since Racine's death. For this new translation, Geoffrey Alan Argent has taken a fresh approach: he has rendered these plays in rhymed "heroic" couplets. While Argent's translation is faithful to Racine's text and tone, his overriding intent has been to translate a work of French literature into a work of English literature, substituting for Racine's rhymed alexandrines (hexameters) the English mode of rhymed iambic pentameters, a verse form particularly well suited to the highly charged urgency of Racine's drama and the coiled strength of his verse. Complementing the translation are the illuminating Discussion, intended as much to provoke discussion as to provide it, and the extensive Notes and Commentary, which clarify obscure references, explicate the occasional gnarled conceit, and offer their own fresh and thought-provoking insights. Bajazet, Racine's seventh play, first given in 1672, is based on events that had taken place in the Sultan's palace in Istanbul a mere thirty years earlier. But the twilit, twisting passageways of the Seraglio merely serve as a counterpart to the dim and errant moral sense of the play's four protagonists: Bajazet, the Sultan's brother; Atalide, Bajazet's secret lover; Roxane, the Sultaness, who is madly in love with Bajazet and dangles over his head the death sentence the Sultan has ordered her to implement in his absence; and Akhmet, the wily, well-intentioned Vizier, who involves them all in an imbroglio in the Seraglio, with disastrous consequences. Unique among Racine's plays, Bajazet provides no moral framework for either protagonists or audience. We watch as these benighted characters, cut adrift from any moral moorings, with no upright character at hand to serve as an ethical anchor and no religious or societal guidelines to serve as a lifeline, flail, flounder, and finally drag one another down. Here, Racine has presented us with his four most mercilessly observed, most subtly delineated, and most ambiguously fascinating characters. Indeed, Bajazet is certainly Racine's most undeservedly neglected tragedy.
Visa hela texten

Geoffrey Alan Argent is an independent scholar residing in Pennsylvania.