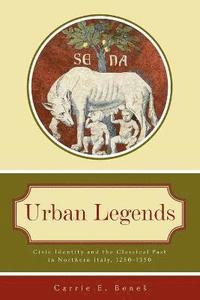 Civic Identity and the Classical Past in Northern Italy, 1250-1350

"Benes' study allows us intimate access to the heart of the North Italian city-state, to the aspirations, fears, and passions, not only of the elites but of the wider urban community. . . . [This is] a magnificent piece of scholarship and a highly valuable contribution to a subject full of modern-day resonance."-P. Oldfield, English Historical Review "Following a useful introduction establishing the four cities' classical connections, Benes presents four chapters in a parallel fashion with background to and specific examples of chronicles or monuments."-J. P. Byrne, Choice "Well before the Renaissance's 'discovery' of the classical past, Carrie Benes finds, medieval Italians at all social levels made extensive use of that past to forge their own corporate identities. This book illuminates an important aspect of Italian city-state history and describes how people in turbulent times sought a usable past in order to define and strengthen them. Benes makes deft use of a wide range of source materials and methodologies-architectural, literary, archival, and anthropological. Urban Legends offers a fascinating glimpse into the formation of memory in the late medieval world."-Thomas F. Madden, Saint Louis University "Carrie Benes has emerged, through a series of important articles, as a leader-in fact, a pioneer-in a new and fruitful field of scholarly endeavor: the medieval history of classical, which is to say Greco-Roman, symbols, myths, and objects. While the manifold uses of the ancient world have long been recognized and seen as characteristic of the Italian Renaissance, Benes shows that high and late medieval Italian city-states made use of the ancient world in interesting and often surprising ways. She blends the acumen of a specialist in documentary culture with the scholarly imagination characteristic of the best cultural historians. This book-as thorough, information packed, and clearly written as it is-will help redraw the picture of the history of medieval Italy, and it will serve as a model for engagement and debate regarding a period and a region often overlooked."-Christopher S. Celenza, American Academy in Rome

Carrie Benes is Associate Professor of Medieval and Renaissance History at the New College of Florida.