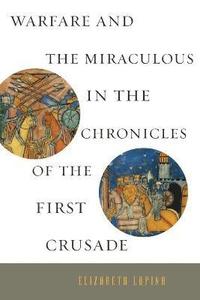 Warfare and the Miraculous in the Chronicles of the First Crusade

av Elizabeth Lapina
Häftad Engelska, 2017-05-15
489
Köp
Spara som favorit
Skickas inom 7-10 vardagar.
Gratis frakt inom Sverige över 159 kr för privatpersoner.
Finns även som
Visa alla 2 format & utgåvor
In Warfare and the Miraculous in the Chronicles of the First Crusade, Elizabeth Lapina examines a variety of these chronicles, written both by participants in the crusade and by those who stayed behind. Her goal is to understand the enterprise from the perspective of its contemporaries and near contemporaries. Lapina analyzes the diversity of ways in which the chroniclers tried to justify the First Crusade as a "holy war," where physical violence could be not just sinless, but salvific. The book focuses on accounts of miracles reported to have happened in the course of the crusade, especially the miracle of the intervention of saints in the Battle of Antioch. Lapina shows why and how chroniclers used these miracles to provide historical precedent and to reconcile the messiness of history with the conviction that history was ordered by divine will. In doing so, she provides an important glimpse into the intellectual efforts of the chronicles and their authors, illuminating their perspectives toward the concepts of history, salvation, and the East. Warfare and the Miraculous in the Chronicles of the First Crusade demonstrates how these narratives sought to position the crusade as an event in the time line of sacred history. Lapina offers original insights into the effects of the crusade on the Western imaginary as well as how medieval authors thought about and represented history.
Visa hela texten

"Taking as a leitmotif a celebrated moment from the narratives of the First Crusade-the appearance of an army of saints during the siege of Antioch-Elizabeth Lapina gradually builds an original and convincing interpretation of crusader psychology and historiography. Her contribution to our understanding of the part played by the Normans in the development of crusade ideology is especially groundbreaking. This is an important and innovative work that is also, from start to finish, a delight to read." -Jay Rubenstein, University of Tennessee "Students and scholars will be very well served by Lapina's careful attention to detail and placement of the crusader tales of miraculous battlefield interventions within a wider context." -Choice "This is an impressive piece of work that brings a new level of understanding to our knowledge of the Crusade chronicles. It is impeccably researched and demonstrates a close attention to detail. There are moments of real originality and many insightful observations. Lapina founds her conclusions upon a strongly rooted base of contextual research which allows her to identify moments when the chronicles were drawing upon deep veins of received wisdom dating back to antiquity, and also occasions when they were advancing ideas that were fundamentally new." -Nicholas Morton, The Journal of Religious History, Literature and Culture "Whether undergraduates or more advanced researchers, all those studying the First Crusade will very much benefit from this book and I, for one, will read these sources with new eyes having benefited from Lapina's new perspectives." -Conor Kostick, Renaissance Quarterly "This is an excellent and rigorous study of what many would see as a niche group of texts. As Lapina has shown, however, these texts were nothing less than medieval efforts to understand the meaning of the crusade. As such, they connected with much more than the events they purported to describe." -Megan Cassidy-Welch, Parergon "Lapina takes a fresh look at how the events in Antioch were reported in chronicles (those written by participants in the Crusades and those created by stay-at-home writers in Western Europe immediately afterwards) and chansons de geste." -Brian G. H. Ditcham, Sixteenth Century Journal

Elizabeth Lapina is Assistant Professor of History at the University of Wisconsin-Madison.

Contents Acknowledgments Introduction 1 Eyewitnesses of Miracles 2 Supernatural Interventions in the Battle of Antioch: The Origins 3 Hostile Appropriations of Byzantine Saints by the Normans of the South 4 The Normans of the South: From Scourge of God to Chosen People 5 Judas Maccabeus: A Jewish Warrior, a Christian Patriarch, and a Muslim General 6 "The West Prepares to Illuminate the East" Conclusion Notes Bibliography Index