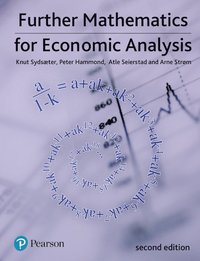 Further Mathematics for Economic Analysis 2nd edition is distinctive because of its emphasis on dynamic optimization, an important yet often underplayed tool in areas such as resource and environmental economics and growth theory. It is written in such a way that many chapters can be read in isolation, so you are free to pick the topics most relevant to you.  In this new edition, several chapters have been extensively rewritten, and numerous other improvements made.

New to this Edition:

Instructors Manual now contains a large range of additional supplementary problems, simple to advanced, suitable for use in examinations

The book is ideal for advanced undergraduate and graduate students of economics who have a basic undergraduate course in calculus and linear algebra.  It presents most of the mathematical tools they will encounter in their advanced courses in economics.  It is also ideally suited for self-study because of the extensive answers it offers to problems throughout the book.

Peter Hammond is currently the Marie Curie Professor of Economics at the University of Warwick, and an Emeritus Professor at Stanford University.  His many research publications are mostly theoretical, but extend over several different fields of economics.   For many years he taught courses in mathematics for economists and in mathematical economics at Stanford, as well as earlier at the University of Essex and the London School of Economics.

Knut Sydster, Atle Seierstad, and Arne Strm all have extensive experience in teaching mathematics for economists in the Department of Economics at the University of Oslo. With Peter Berck at Berkeley, Knut Sydster and Arne Strm have written a widely used formula book, Economists Mathematical Manual (Springer, 2005). The 1987 North-Holland book Optimal Control Theory for Economists by Atle Seierstad and Knut Sydster is still a standard reference in the field.