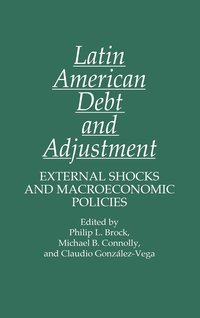 av Philip L Brock, Claudio Gonzalez-Vega, Michael B Connolly
Inbunden Engelska, 1989-04-01
939
Köp
Spara som favorit
Skickas inom 10-15 vardagar.
Fri frakt inom Sverige för privatpersoner.
The fourteen papers presented in this volume are thought-provoking studies of the economic adjustment of Latin America to the difficult external environment of the 1980s. The anthology evolved out of a group of papers presented at the Third Dominican Republic Conference on International Debt and Adjustment in 1986. A number of the papers were updated and are presented here along with new ones written especially for this collection. The debt problems of Latin America form the background for the analyses undertaken by the articles in the book. The articles go beyond description of the debt problems to offer insights on the more fundamental long-range problems facing policy makers in the region. Positive analyses into the nature of the adjustment process and insights into future institutional changes that could improve the functioning of the Latin American economies highlight the book. The papers are divided into major topics of concern. The transmission of external shocks to the region and instability to the financial markets are covered. Fiscal constraints, labor market adjustment, exchange rates, and the political economy of adjustment as each relates to the external shocks of the 1980s are investigated. A major essay by Montague Lord shows Latin American potential to reap substantial gains by pursuing policies to encourage expansion of its resource-based comparative-advantage activities. The essays in Latin American Debt and Adjustment provide a starting point for the consideration of some of the deeper problems that need to be addressed by any meaningful attempt to improve the market-oriented economies of the region.
Visa hela texten

Preface Introduction: Latin American Debt and the Transfer Problem The Transmission of External Shocks to Latin America Debt, Depression and Real Rates of Interest in Latin America Lessons of the Past: The Role of External Shocks in Chilean Recessions, 1926-1982 The Transmission of Terms-of-Trade Shocks Fiscal Constraints and the Adjustment Process Fiscal Lags and the Problem of Stabilization: Argentina's Austral Plan Adjustment to Interest Rate Shocks in Latin America and the Caribbean Financial Market Instability and External Shocks Macroeconomic Instability and Moral Hazard in Banking in a Liberalizing Economy The Chilean Financial Collapse Labor Market Disequilibrium and Adjustment Labor Market Adjustment with Wage Indexation: The Case of Chile Between 1974-1980 Monetary and Exchange Rate Policies Debt and Adjustment in the Dominican Republic: The Second Time Around Exchange Controls and the Breakdown of Central American Trade in the 1980s The Equilibrium Exchange Rate of the Mexican Peso: A Monetary Approach The Political Economy of Stabilization Programs Debt, Stabilization, and Liberalization in Costa Rica: Political Economy Responses to a Fiscal Crisis Recession and Adjustment in the Dominican Republic: 1983-1985 Long-Run Trade Strategies for Latin America International Commodity Trade and Latin American Exports: An Empirical Investigation Bibliography Index