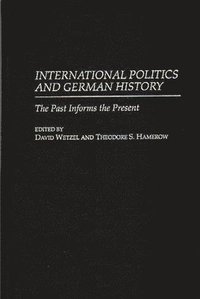 The Past Informs the Present

av Theodore S Hamerow, David Wetzel
Inbunden Engelska, 1997-07-01
1019
Köp
Spara som favorit
Questions of international politics, as they relate to German history, are explored in this authoritative and controversial volume. Of the seven essays that constitute the book, four-those by Schroeder, Lauren, Rupieper, and Abenheim-center on diplomatic history and international politics, while the other three-by Barclay, Chickering, and Post-illuminate related political and cultural transformations. The Afterword by the two editors, Wetzel and Hamerow, deals with the works and philosophy of Gordon Craig, the preeminent historian of Germany to whom the book is dedicated. Craig's achievement has been to bring knowledge and interpretation into narrative history and to show that history is a self-sufficient and self-contained discipline, important for its own sake. These essays are bold and provocative; they can rightly claim originality, new insights, hitherto unrecognized aspects, new techniques of analysis for the subjects they cover; and for these reasons, as much as for any other, they deserve the attention of all those who care about German or international history.
Visa hela texten

DAVID WETZEL is an analyst in the administration of the University of California at Berkeley. THEODORE S. HAMEROW is G. P. Gooch Professor Emeritus of History, University of Wisconsin, Madison.

Introduction by David Wetzel and Diethelm Prowe Does the History of International Politics Go Anywhere? by Paul W. Schroeder The Diplomatic Revolution of Our Time by Paul Gordon Lauren Monarchy, Court, and Society in Constitutional Prussia by David E. Barclay Karl Lamprecht: A Historian's History by Roger Chickering "Der Bund Fur Burgerrechte": Transnational Relations and the Problem of Democratization in West Germany, 1949-1954 by Hermann-Josef Rupieper German Unity and Military Professionalism: The Officer Corps of the German Armed Forces Confronts the Legacy of the Nationale Volksarmee, November 1989-January 1993 by Donald Abenheim Reflections on the German Question by Gaines Post, Jr. Afterword: Gordon Craig and the Old-fashioned Way of Doing History by David Wetzel and Theodore S. Hamerow Selected Bibliography Index