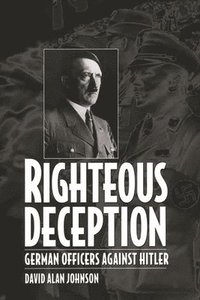 av David A Johnson
Inbunden Engelska, 2001-09-01
519
Köp
Spara som favorit
Skickas inom 10-15 vardagar.
Fri frakt inom Sverige för privatpersoner.
In the spring of 1944, Adolf Hitler firmly believed that the Allies would invade the Continent by landing troops on the beaches of Normandy, but anti-Nazi officers in German Intelligence ultimately persuaded him that Normandy would be a mere diversion. The real invasion, Hitler was assured, would be at Calais. Righteous Deception focuses on the activities of two officers whose consciences kept them from siding with Hitler and the Nazis. Their campaign of misinformation and deception convinced Hitler to keep half of the German forces in northern France to defend against an invasion that would never come. This decision ultimately cost Hitler the war. Admiral Wilhelm Canaris, head of German Military Intelligence, turned against Hitler within a year after he had come to power. Canaris and his circle of friends in an opposition movement known as the Schwarze Kapelle (Black Orchestra) did everything possible to prevent Hitler from winning the war, which believed would be a catastrophe. Colonel Alexis von Roenne headed the Fremde Heere West, the branch of Intelligence responsible for evaluating the strength of Allied forces. In a key position to alter findings and other information pertaining to Allied forces in Britain, he doubled the estimated number of troops assembling for D-Day, giving the impression that the Allies had enough men and equipment in Britain for both an invasion in Calais and a diversion in Normandy.
Visa hela texten

"Johnson has interwoven the key stories behind the successful landings in Normandy--the Allies' elaborate schemes to deceive the Germans, the 'Canaris effect' on enemy morale and the German officers' plot against Hitler, Berlin's failure to uncover the secrets of D-Day--revealing how diverse aims and elements proved decisive for Allied victory. A useful interpretation of events in a crucial intelligence game." Richard Wires author of The Cicero Spy Affair

DAVID ALAN JOHNSON has written extensively about the Second World War for more than 20 years. In addition to the several books on various aspects of the conflict, he has also done nearly two dozen magazine articles, a television script, and has appeared on The History Channel. This is his seventh book.