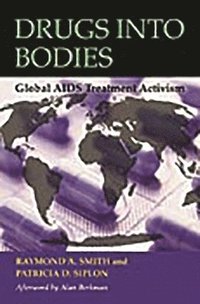 av Raymond A Smith, Patricia D Siplon
Inbunden Engelska, 2006-03-01
629
Köp
Spara som favorit
Skickas inom 5-8 vardagar.
Fri frakt inom Sverige för privatpersoner.
Drugs into Bodies recounts the emergence and development of a globally oriented AIDS treatment activist movement that refused to accept that more than 40 million people with HIV in the developing world should simply be left to die. Rooted in earlier AIDS activist efforts, this new movement has forged a global network dedicated to providing universal access to life-saving medications. More than 40 million people are living with HIV/AIDS worldwide, yet only a small fraction have access to life-saving treatments. For many years, governments, pharmaceutical companies, and even some international relief agencies have called this a tragic but unavoidable situation, given the high cost of the medications used to fight HIV. A small but growing group of activists, however, have banded together to prove that the obstacles to universal HIV treatments are mostly human-made, and thus can be overcome by human actions. Drugs into Bodies chronicles the birth and expansion of the global AIDS treatment activist movement, focusing in particular on the U.S.-based organization Health GAP. Drawing on the legacy of the protest group ACT UP and other earlier AIDS activism, Health GAP and like-minded allies have forged a global network to combat the AIDS crisis in Africa and throughout the developing world. From the White House to the United Nations, from plush corporate offices to South African shantytowns, AIDS treatment activists have defied the dictates of globalization, altered government policies, shamed multinational corporations, secured funding for treatment, and brought hope to millions of people with HIV.
Visa hela texten

"Political scientists Smith and Siplon analyze the rise and success of the second great AIDS treatment activist movement, which advocates making the medicines that have been developed available to everyone who needs them both in the US and throughout the world." - SciTech Book News "Drugs Into Bodies: Global AIDS Treatment Activism is a thorough and careful review of the history of AIDS activism viewed through the lens of the authors' beliefs about the socioeconomic forces and politics that have driven the activism around HIV care....Hopefully, in the end, this book will inspire readers to look beyond the moment and push for a solution to the world HIV epidemic, as well as an ongoing commitment to end the epidemic here in the United States." - PsycCRITIQUES "This activist's manual by Smith and Siplon -the title of which refers to an AIDS slogan-is divided into two parts: Building a Domestic AIDS Treatment Activist Movement and Forging a Global AIDS Treatment Activist Network. The book traces the progression of the global AIDS treatment activist movement, paying special attention to the organization Health GAP. It promotes disruptive activists' tactics introduced by the protest group ACT UP, an agenda greatly facilitated by the rise of the Internet and capable of empowering the disenfranchised across national boundaries by encouraging demonstrations and confrontational politics against a profit-driven global economy and antipoor global politics. Social activists will find this book an invaluable resource. For libraries serving that audience." - Library Journal

Raymond A. Smith is Adjunct Assistant Professor of Political Science at Columbia University and New York University. He is editor of the award-winning Encyclopedia of AIDS, general editor of the book series Political Participation in America, co-author of Gay and Lesbian Americans and Political Participation, and co-author of HIV Treatments and Mental Health. He has served as editor of the community-based HIV/AIDS magazine Body Positive, as a researcher at the HIV Center for Clinical and Behavioral Studies, and as research director of the National Alliance of State and Territorial AIDS Directors. Patricia D. Siplon is Associate Professor of Political Science at Saint Michael's College in Colchester, Vermont. She is the author of AIDS and the Policy Struggle in the United States. She has conducted research and done advocacy work on HIV/AIDS politics and policy in the United States and East Africa, most recently as a Fulbright Africa Regional Research Award recipient in Tanzania in 2005.