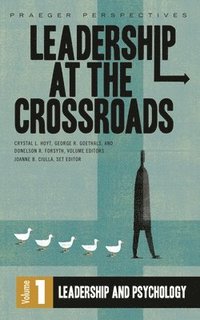 Leadership at the Crossroads [3 volumes]

av Joanne B Ciulla, Crystal L Hoyt, Lori Cox Han, George Goethals, Michael A Genovese
Inbunden Engelska, 2008-10-30
2249
Bevaka
Spara som favorit
Tillfälligt slut – klicka "Bevaka" för att få ett mejl så fort boken går att köpa igen.
Finns även som
Visa alla 1 format & utgåvor
What is leadership? Not only has that question been debated since the beginning of human culture and society, but it's a moving target based on the definer, and the epoch. The definition can be thought-provoking and profound: A leader is best when people barely know he exists, not so good when people obey and acclaim him, worse when they despise him, (Lao Tzu, 6th century BC ). Or the profundity may lie shrouded in the prosaic: A leader is one who has followers, (Peter Drucker, 20th century). However you define the concept, today's challenges for leaders of all stripes are monumental, and the need for effective leadership is huge. More than anything, this set travels farther and digs deeper than most leadership books. It takes us from mere explanations of leadership to an understanding of it as part of the human condition. Reading it should be at the top of the to-do list for any leader in any era. In Leadership at the Crossroads, contributors from a wide variety of fields, including management, economics, political science, philosophy, sociology, history, literature, and psychology, explore the many facets of leadership. The set comprises: Volume 1: Leadership and Psychology; Volume 2: Leadership and Politics; Volume 3: Leadership and the Humanities. Collectively, this set showcases traditional and emerging approaches to leadership in both theory and practice and raises new questions brought on by society's new challenges. It also suggests solutions for developing and promoting leadership in the corporate world, politics and diplomacy, religion, education, non-profits, and the arts. Whether identifying qualities that will serve a U.S. president well, or the characteristics of the essential can-do supervisor in today's corporation, Leadership at the Crossroads supplies insights and intelligence that will help leaders make the most of the challenges and opportunities lying before them.
Visa hela texten

"... The competent scholarship and careful editing provide a research foundation for leadership in a contextual environment, involving both realism and imagination. Volume 1, on social psychology, makes apparent the connections between human interactions and leadership; volume 2 establishes a basis for leadership in contemporary politics and the public arena. Articles show that leaders do not lead in a vacuum, and that one can only understand leadership's dynamic within a shared context. Volume 3 ties leadership models and theories to fictitious characters from classical literature, to historical leaders' situational reality, and to philosophy, music, and the arts, offering new insights in an imaginative, creative approach... Highly recommended. Upper-level undergraduates through professional/practitioners." - Choice