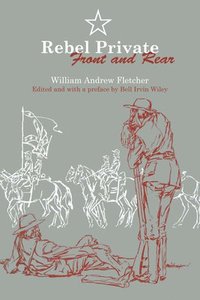 av William Andrew Fletcher, Bell Irvin Wiley
Häftad Engelska, 2012-03-01
179
Köp
Spara som favorit
Skickas inom 10-15 vardagar.
Fri frakt inom Sverige för privatpersoner.
Rebel Private Front and Rear is a line soldier's account of the Civil War without heroics. Private Fletcher tells how at Gettysburg he was overcome by a "bad case of cowardly horror" when an order came on the third day to get ready to charge. "I tried to force manhood to the front, but fright would drive it back with a shudder," he confessed. The attack of jitters lasted about fifteen minutes, and then he fell asleep while awaiting the order to advance. But Fletcher could be brave to a fault. He was restless and venturesome and during the lulls between fighting would sometimes ask for permission to go on dangerous scouts into enemy territory. Once, just before Fredericksburg, he slipped out to a haystack in the no-man's-land near the Rappahannock so that he could watch the Yankees build a bridge. And in his last fight at Bentonville he risked his life on a rash and futile impulse to capture a whole squad of Federals. At Second Manassas, Fletcher was struck by a bullet that grazed his bowels and lodged in his hip. His detailed description of his subsequent sensations and experiences is one of the most interesting portions of his narrative. He begged the surgeons to operate, but when they started cutting he howled so profanely that they threatened to abandon him. His reply was: "It don't hurt as badly when I am cursing." Wounded again at Chickamauga, Fletcher was incapacitated for further infantry service and was transferred to Company E, Eighth Texas Cavalry, and served with Terry's Rangers until the end of the war. In north Georgia he participated in a number of thrilling skirmishes with mounted forces of Sherman's command, and in one of these encounters he lost his horse. A short time later, in a daring effort to capture a mount from the Yankees, he was taken prisoner. The story of the forming and execution of his plan to escape by jumping from a moving boxcar is full of suspense and excitement. Rebel Private also reveals Fletcher as something of a philosopher. The narrative is sprinkled with dissertations on unexpected subjects, such as God, justice, and war. He reflects on the rightness and the necessity of "foraging," in home as well as enemy territory, but he tells with evident relish how he and his "pard" of the occasion "pressed" whiskey, honey, and chickens. Fletcher set down his experiences some forty years after the close of the Civil War. His story is told with the artlessness of the natural raconteur. Though the style is unpolished, the memoir makes lively reading because of the author's eye for detail, his straightforward language, and his sense of humor. One of the most frequently cited narratives written by soldiers of Lee's army, it derives its value as a historical source mainly from Fletcher's honesty, his close observations, the richness and variety of his experiences, and the sharpness of his memory.
Visa hela texten

Bell Irvin Wiley (1906-1980), who edited this volume for publication, was a noted historian of the Confederacy.

Preface To the Public Experiences and Observations from the Early Fifties and through the Civil War General Jackson's Flanking General McClellan and Seven Days' Battle before Richmond, Virginia Battle of Second Manassas Battle of Fredericksburg, Virginia Battle of Gettysburg, Pennsylvania Battle of Chickamauga Capture and Escape Surrender and Return Home Index