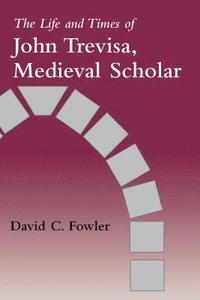 The Life and Times of John Trevisa, Medieval Scholar

av Professor David C Fowler
Inbunden Engelska, 1995-06-01
1139
Köp
Spara som favorit
Skickas inom 5-8 vardagar.
Fri frakt inom Sverige för privatpersoner.
Finns även som
Visa alla 1 format & utgåvor
John Trevisa (ca.1342-1402), perhaps the greatest of Middle English prose translators of Latin texts into English, was almost an exact contemporary of Geoffrey Chaucer. Trevisa was born in Cornwall, studies at Oxford, and was instituted vicar of Berkeley, a position he held until his death. Over a period of thirty-five years eminent medievalist David Fowler has pieced together an account of Trevisa's life and times by diligently seeking out documents bearing on his activities and translations. This has resulted in a cultural history of fourtheenth-century England that ranges from the administrative, geographical, and linguistic status of Cornwall to the curriculum of medieval university education, and from religious and secular conflicts to the administration of a substantial provincial household and the role of its aristocratic keepers in the Hundred Years War. Fowler provides an analysis of Trevis's known translations the "Gospel of Nicodemus", "Dialogus inter Militem et Clericum", FitzRalph's "Defensio Curatorum", the "Polychronicon", "De Regimine Principum" and "De Proprietatibus Rerum." He also advances the hypothesis that Trevisa was one of the scholars responsible for the first complete translation of the scriptures into English: the Wycliffite Bible. An appendix contains a collection of biographical and historical references designed to illustrate Fowler's contention that Trevisa may have been responsible for the revisions of "Piers the Plowman" now known as the B and C texts.
Visa hela texten

Bloggat om The Life and Times of John Trevisa, Medie...