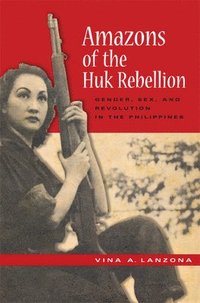 Amazons of the Huk Rebellion

Gender, Sex, and Revolution in the Philippines

av Vina A Lanzona, Alfred W McCoy
Häftad Engelska, 2009-03-15
329
Köp
Spara som favorit
Skickas inom 3-6 vardagar.
Fri frakt inom Sverige för privatpersoner.
Labeled "Amazons" by the national press, women played a central role in the Huk rebellion, one of the most significant peasant-based revolutions in modern Philippine history. As spies, organizers, nurses, couriers, soldiers, and even military commanders, women worked closely with men to resist first Japanese occupation and later, after WWII, to challenge the new Philippine republic. But in the midst of the uncertainty and violence of rebellion, these women also pursued personal lives, falling in love, becoming pregnant, and raising families, often with their male comrades-in-arms. Drawing on interviews with over one hundred veterans of the movement, Vina A. Lanzona explores the Huk rebellion from the intimate and collective experiences of its female participants, demonstrating how their presence, and the complex questions of gender, family, and sexuality they provoked, ultimately shaped the nature of the revolutionary struggle. Winner, Kenneth W. Baldridge Prize for the best history book written by a resident of Hawaii, sponsored by Brigham Young University-Hawaii
Visa hela texten

"Vina Lanzona's account of Filipinas who, as girls and young women, joined the Huk insurgency is genuinely eye-opening. This book will be of interest to anyone thinking about women and social movements, gender and war, or masculinized ambivalence."--Cynthia Enloe, author of Globalization and Militarism: Feminists Make the Link "The great strength of Amazons of the Huk Rebellion derives from Lanzona's interaction with the women who participated in the Huk movement and from the skill with which she has entwined their voices with chronological narrative and gender theory. This book not only casts new light on a significant period of Philippine history but also raises comparative questions for scholars working on revolution and social action elsewhere."--Barbara Watson Andaya, University of Hawai'i "Lanzona traces successfully the role of the Filipina guerilla in relation to the collective Huk movement and explores non-essentialist relationships between men and women, while at the same time restoring the Huk Amazons to their rightful historical legacy. This work, told through the lives of the Huk Amazons, is a valuable contribution to the feminist tradition of women warriors and their families."--Ana Thorne, Women's Studies

Vina A. Lanzona is assistant professor of history at the University of Hawai'i-Manoa.